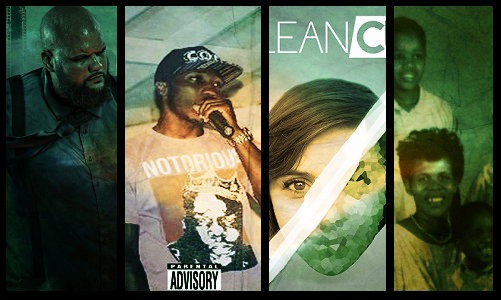 The San Diego duo known as Clean/Cut dropped their new EP last week which features this snappy single, “Feel Something”. Clean/Cut have a crisp lyrical style that pairs well with the electro-pop underpinnings of the instrumentation on this track. The lyrical content takes a critical look at life in the post-human era of tindr and fancied-up coffee and disaffection. Don’t worry, “Feel Something” has some hope tucked away in beyond its existential angst. Give the single from Clean/Cut a listen below &/or head here for the complete EP.

This latest single from Afika Nx is all-around awesome.  From the Caribbean-influence on the minimal beat to the touching lyrics that pay tribute to the artist’s mother, “Oh Mama” has an easygoing atmosphere filled with all the love and appreciation kids feel for their single moms, mine included. Spend some time with “Oh Mama” by Afika Nx and then, if you can, give your mother a call. She probably misses you and you probably miss her too.

This Michigan-based emcee (by way of Japan and California) has a pensive rhyme style that addresses the uncertainty that accompanies the life of an artist. Ollie Joseph might be relatively knew to the music-making game but he’s got some real potential as a songwriter. “Whatever Happens” was produced by Siren, who also worked with Ollie Joseph on his debut single. The track also features the vocal stylings of Alexa Lusader. Give “Whatever Happens” by Ollie Joseph a listen below…

The Chicago rapper known as Woes certainly holds up to his name. On his new single, Woes dives down to reach emotional depths and reports back his findings with refreshing honest. “Whiskey” combines a simple (and chill) beat with the contemplative discourse of Woes’ vocals.  The track was produced by Mitch Geist and features the musical guests Aaron Black (additional vocals) and Des Martin (bass). Give the single a spin below…

Lee Black’s new EP, Who is Lee Black?, drops tomorrow but the L.A. emcee offered up this single as a little taste of what’s to come. A steady beat with some of that West Coast slink lays the groundwork for Black’s stellar lyrical delivery. If you hone in on the lyrics, you’ll find an ambitious push toward your better self. If you phase out here and there, you might think Lee Black is someone you don’t want to fuck with [i.e.,”killing off all that weak shit, bury it under cement”]. Give “Body Bag” from Lee Black a spin below. The EP drops tomorrow!

This short number clocks in at under two minutes, but King Wish manages to pack a lot of love-lost remorse into that time. “Amber Alert” usually refers to a child-abduction, but in this case, we’re dealing a different type of tragedy: the break-up kind. This single, which was produced by Young Tay, dropped last month. Since that time, King Wish has been keeping busy and already has a couple new slick singles to share with fans available. Check out “Amber Alert” below and then consider delving further into the online song offerings from King Wish.