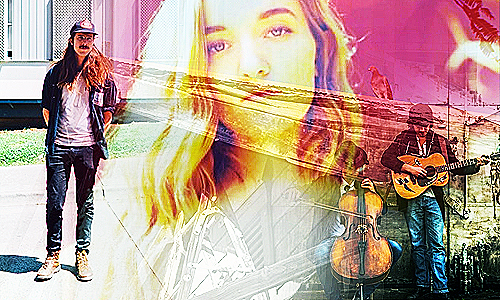 PHX Americana favorites, Huckleberry, are gearing up for a brand new album. Yes folks, on April 7th, Huckleberry will be releasing their latest LP on limited edition vinyl. In prelude to this momentous occasion, the band shared a couple early tracks from the album with fans and friends, including this gem, “Working Backwards”. As soon as that slide kicks off the easygoing summer sound on this track, you’ll be hooked. At least, I was. Huckleberry put out “Working Backwards” in February and followed up with the March release of “Tether” which definitely puts the ALT in alt-country. Check out both singles, starting with “Working Backwards” below, and don’t forget to pre-order your vinyl copy of Natural Selector from Huckleberry here. And, you can catch the act live on April 8th at Valley Bar with Luau, Fairy Bones, and Saddles so make sure you mark your calendar (more here). Do it now. I’ll wait…

This Gospel/Americana act out of L.A. sounds straight from the Heartland. The Eagle Rock Gospel Singers go full-on church choir with their harmony-rich melodies and salt-of-the-earth sound on “Lay Down Low”. No surprise that this act has already played some “prestigious festivals such as Winnipeg Folk Fest, Montreal Jazz Fest, Austin City Limits, and Voodoo Fest of New Orleans.” Once you hear “Lay Down Low”, you’ll totally want to add The Eagle Rock Gospel Singers to your bucket list of bands you have to see perform live. The ERGS will be releasing their sophomore album this Spring so make sure you keep your ears open for that release. Until then, enjoy “Lay Down Low” below..

“Don’t Want To Be Yours Anymore”

Inspired by the Water Protectors fight at Standing Rock, Pop Cautious Records will be releasing a compilation album to support Native American Rights this coming June. “Don’t Want to Be Yours Anymore” by Sam Valdez is the first single from that forthcoming effort. The Los Angeles-by-way-of-Las Vegas songbird delivers a Westerly stoicism with her lyrics and voice – both stunning and subdued. “Don’t Want to Be Yours Anymore” will leave you in a somber mood but you’ll still be reaching for that repeat button because it is also lovely. Give the new single from Sam Valdez a listen below. And, don’t forget to check out the comp from Pop Cautious when it drops in June! Mni Wiconi!

Forever Son’s indie folk sound reminds me of summertime as a kid: homemade jean shorts and Bomb Pops and my mom listening to Crosby, Stills, Nash, and Young while she tans in the backyard. “Crumb Kitchen” provides a gentle reminder of an earlier era of folk-rock when hair was long and distortion still something to avoid. Forever Son is the musical undertaking of Melbourne-based musician, Jack Robbins. I don’t know what I like more: the early morning atmosphere of “Crumb Kitchen” or Robbins’ bourbon-smooth voice. Thankfully, I don’t have to choose and neither do you. Both can be heard on the single below…

Ugh, how long has this band been in Flagstaff? Why haven’t I been told? Come on, Arizona, we’re all supposed to work together to keep each other informed and I feel I’ve been left out cold on this whole Tow’rs thing. This indie-folk act shapes out a breathtaking number of subtle grace and beauty on “Liminal”. I even did a search on our site to make sure they hadn’t slipped by me quietly one July morning, but no, this is the first track I’ve heard from them. And I’m completely enamored. Tow’rs is currently out on tour and I’m hoping they’ll add some PHX shows to their schedule once back on hometurf. Until then, enjoy “Liminal” by Tow’rs below…

On “Big Crane” we find a Brit-folk take on the Americana sound. A Different Thread combines the musical talents of singer-songwriter Robert Jackson and calssically-trained cellist Isaac Collier. And, if there sound doesn’t sell you on their Americana spirit, the pair met while busking and were playing together just a short couple of months gaining the attention of BBC Bristol. Maybe that has something to do with the honeyed vocals and astute instrumentation of A Different Thread which comes through on “Big Crane”. Check out the single for yourself below…

Australia has an Americana/Alt-Country music community?? Well, they do and I know that because Hana & Jessie-Lee come to us from the land Down Under with their dusty and soulful country sound on “Maryses”. Hana & Jessie-Lee draw inspiration from artists like Hank Williams, Bonnie Raitt, and The Staple Singers so expect to hear some American steel strengthening the core of this musical pairing. They’re joined by their band, the Bad Habits, on this track so the sound is fully fleshed out with double bass, fiddle, drums, and keys. Give “Maryses” a listen below…