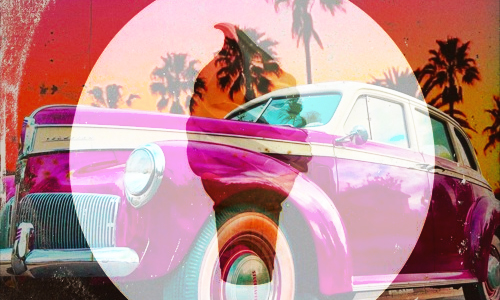 The L.A. vibe on this track matches up with the very L.A. story of the man behind the music. Garrett Hazen (along with his twin brother Kent) were child actors in the 90s (ever see Roseanne?) but Garrett devotes himself to the musical arts these days. There’s a beachy brightness to “Some Brutal Love” as it blurs the line between indie rock and garage pop. Hazen nails that right amount of careless-cool that feels like hanging out at the gas station and smoking cigarettes, before you’re old enough to buy them, all while drinking an inhumanly sized serving of soda pop. You know, that teenage summertime feeling. “Some Brutal Love” marks the first solo single from Garrett Hazen. Let’s hope more tracks are to follow. Give the single a spin below or head here to add the track to your personal collection.

Man, this is one of those singles we can’t cover fast enough to fit with our unwritten motto: find ’em first. Between the time we added this single to the schedule before it dropped and now, “Grandma’s Car” was a Spotify pick for New Music Friday and landed the track on Spotify’s Viral 50. Although the Ryon of Ryon’s World is a D.C. native, this pop hit has an island atmosphere that will have you reaching for sunblock and a frozen fruity cocktail before you hit the first reprise. Ryon’s World is a summer anthem for those kids too broke for vacation, but no less deserving of love. Chill out in Ryon’s World with “Grandma’s Car”. Head to iTunes to get your own digi-download for those poolside playlist.

A surf rock band from Manitoba? Maybe all that chilly weather has the Miseryslims dreaming of warming climates and that longing comes through in their music. “The Machine Stops” doesn’t really have that California surf sound, but seems like it might come from a different coastline. Miseryslims mix in some Britpop hues into their indie palette. And, frankly, I’m loving this combination. Give “The Machine Stops” a listen below and head here to check out the EP from whence it came.

After you listen to “Trumpet of Conscience”, it will probably surprise you to learn that the Matadors are a DIY, one-man-band who records tracks in his bedroom. The British act definitely sounds like he’s working from a studio setting with a full band at his back. On this new single, crunchy guitars drive the buoyant summertime melody that hearkens back to an earlier era of rocknroll. Matadors are definitely an act to keep an eye (or ear) on. This single was released as part of the RIP Records Introduces Series which was created to introduce little-known acts to the larger world. So far, so good, RIP Records, because without the series I might never have found Manchester’s Matadors. Listen to “Trumpet of Conscience” below…

“How Weird is Now”

The sunny energy of The Starter Wives’ new single feels like that summer breeze when you’re out skateboarding in a pair of homemade cuts offs on a listless afternoon or like drinking cold keg beer from a plastic cup in some stranger’s backyard while sweat dribbles down your back. “How Weird is Now” is luminous garage rock for those days you want to put the top down and sing-along. This Vancouver three-piece definitely sound like they’re from further south along that Western Coast; a place of perpetual sunshine, surfboards, and slender blondes. Basically, this might be your new summertime jam. Check out “How Weird is Now” by The Starter Wives below or head here for that digital download.

Maybe you’re not about tearing up the city in a convertible or backyard keggers. Maybe you’re summer is more about hammock naps, lemonade, and hiking along streams to the perfect picnic spot. If that’s the case, The Arcadian Wild just might be for you. The latest single from the band, “Envy Green”, paints a lush landscape with its orchestral indie folk. This Nashville trio seems like they’d feel equally at home playing barefoot on your grandmother’s front porch or for a crowd of bearded hipsters. Check out “Envy Green” by The Arcadian Wild below or head here to add the single to your personal collection.