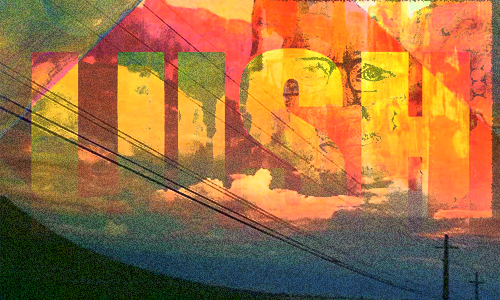 Singer-songwriter Howe Gelb is practically synonymous with the Tucson sound: something a little dusty and desolate. Back in February, Gelb released the aptly-titled album, The Open Road – Arizona Amp & Alternator, which offers fans a collection of singles and sketches reaching back over the past five years.

The Open Road kicks off with the title track opening the album which will bring a flush of the familiar for fans as that distinctively ambling alt-folk fills your ears. As far as favorites from the release goes, I love the noir vibe of “five star hotel” but I’m also quite taken with the closing track’s yarn about a gal called “jane by any other name”.  And, I can’t count out “left of center” which features Lonna Kelley as the guest vocalist.

Even the instrumentals on this album are wonderfully vivid; merging jazz-lounge ambiance with a bit of the beer’n’burlesque feel of the Wild West. This album meanders with surprising grace given that the tracks were pieced together over a such extended period. Then again, it’s in no way surprising if you’re familiar with Gelb’s extended body of work not only as a performer but also as a producer. As the weather moves toward sweltering, this is the perfect album to sink into in its entirety on those listless evenings spent waiting for the sun to set.

Is There Someone for Everyone?

Phoenix songwriter and musician Robin Vining of Sweetbleeders fame released a collection of stripped down songs last month. Is There Someone for Everyone? really shows off Vining’s strengths as a songwriter and composer, moving from sprightly sea ballads to melodic musings on the nature of love. Each song stands on its own accord without a single instance of the filler I too often find on other albums.

There’s no picking a favorite song for me here.  The piano-driven title track feels like the perfect rainy day song while the intentionally sparse and powerfully desperate “Temptation” begs for repeated listens. And I do love the Western amble of “Watch Where You Step”. The trademark pliancy of Vining’s vocals come through in high shine on tracks throughout the album, particularly on “Wild at Heart” and “Ice Floes”. Bascially, music-lovers, you just need this album in your life.

Is There Someone for Everyone? is available for preview and purchase through Bandcamp, but the official release date is next month in Phoenix. More information on that event here.

The Lonesome Wilderness dropped their much-anticipated EP, Lush, at The Rogue in January and we were on hand to help celebrate the occasion. Lush offers up five tracks of desert garage rock that ignores any presumed division between alt and indie.

The EP opens with “Karma” which feels like it holds all the spiritual insight of a really great acid trip. The somber, and slightly sullen, “Alright” delivers just the right amount of angst before the energy gets turned up for illicit tale of “Murder in Chicago”.

The texturing gets downright trippy on “Stay Out of the Sun” but the band doesn’t rely on those extended post-rock tangents to fill out the EP. Although there are those moments too, this band has a Western sensibility that rises to the surface of their sound, even when the rocknroll comes in without all the textural flourishes usually found in over-abundance on “desert garage rock” releases. They keep things crisp, even when it gets fuzzy. “Nico”, the almost 5-minute closing track, is my late-to-the-game favorite from Lush. There’s a very “Chelsea Hotel No. 2”, folk-rock feel that gives way to modern modes of song construction (or Deconstruction).