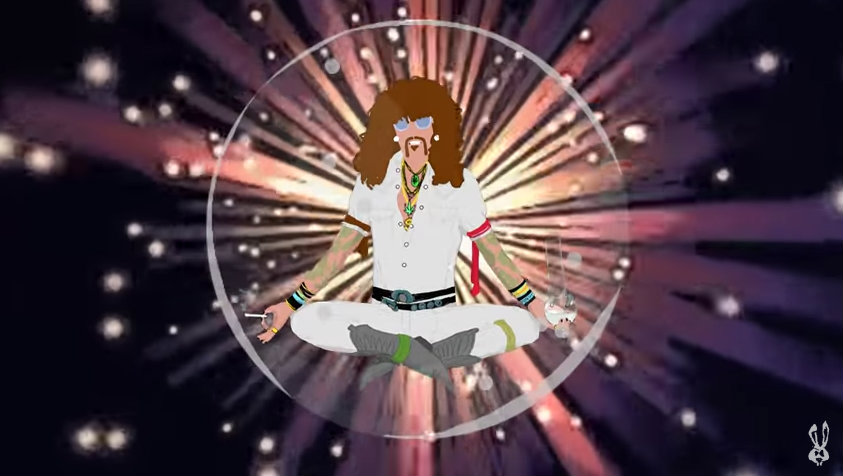 All you SupaJoint fans, get ready to get centered because your favorite stoner just expanded from humorous HipHop into some serious shit. That’s right, folks. The performer known as HotRock SupaJoint who made his name on the Phoenix scene with his #weed antics gets downright spiritual in his latest film enterprise: Chakra Khan (A Stoner’s Guided Meditation…).

Chakra Khan, an animated video that clocks in at just under 25 minutes, breaks down esoteric truths into relatable ideas. And that Hotrock wisecracking style is full present to guide you through your chakras. Plus, all jokes aside, there are some valuable messages SupaJoint conveys in colorful cartoon form.

And, with all the misery in the world around us, maybe we could all use the “bubble of sweetness” SupaJoint offers participants in this cosmic journey inward. Let SupaJoint walk you through your chakras and soothe your spirit.

Check out the video down below, but first, we had a little Q&A sesh with the Stoner Supreme himself to find out the more about the #weed guru and the movie-making-magic behind Chakra Khan (A Stoner’s Guided Meditation…).

YabYum: The video dropped toward the end of 2016, but it seems especially poignant this year, given the current political climate. I’m just curious what initially prompted you to take your act from everyone’s favorite faded emcee to this new spiritual level?

HotRock SupaJoint: Great question, YabYum. So I be gettin high on my porch, chattin wit some yoga homiez who smoke weed out in CA, an we both be all like “Yo, why ain’t there no guided meditation/yoga shit wit the stoners in mind?”

Let’s face it, #weed be big biz, an since jus bout erybody be smokin the shit, there gotta be a market fo this kinda shit. An why I be out there, jus gettin high, I had this vision yo. I think that bud I be smokin be like space-weed or some shit, cuz as I be gettin high, I had this vision a Ms. Chaka Kahn, an I be all like “Yo Ms. Kahn. I be totes feelin all the heaviness a the emotions a all the peeps on the Earf yo, an they be screamin out to find that help homie.” An then Ms. Kahn, who be all done up like that Virgin Mary de Guadelupe from the candles, cept I cud see all her chakras, an they be all charged up an lit the fuck up, she took me by the hand an be all like “HotRock. I feel fo you.”

An then I woke up, but not jus from the vision, I be like WOKE yo, so I wrote this guided meditation an my homie BEEMaster J helped me wit the beats an shit. This a huge step fo me, bein jus a rapper an shit, but yo I think the peeps a the Earf be needin this kinda positivity an shit rite now.

Were you well versed on chakras before beginning this project? Or was there some research involved?

Word. I heard bout them chakras an shit from peeps goin back a few years, but I didn’t know much bout it, so I googd all bout that shit on my phone fo like 20 minutes, an it seem like a great form a expression fo the mo esoteric way the humans be interacting wit the universe an the otha peeps on the Earf, an I be all like “Yo. There some money here yo. An I need weed, so…” BOOM. Help peeps fig they shit out… make some weed$$ in the process. Win win yo. 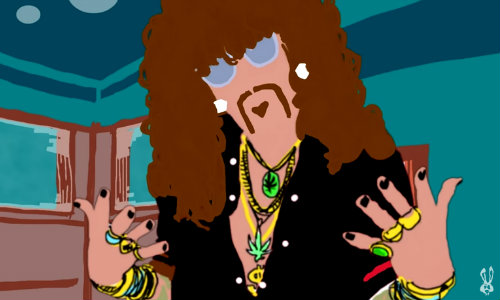 Give me the deets. How’d you go about making a 25 minute animated video? That seems pretty ambitious.

So like I say befo, I wrote the shit out in one sittin after gettin jus high as fuck an doin a little research. Then me an BEEMaster J watched a bunch a them guided meditations on the YouTube. Got feels fo what them meditationerz an them yoga pant bitchez be lookin fo musically… recorded the vox one day. Spent about four mo days buildin the backbeats an all that musical shit. Then, I remembered I heard bout this program calld “OpenToonz” that jus had done went open source, an that be the program that Futurama used in the early days, so I be all like “I can download this program fo free an learn that shit?”

An then I be all like “Fuck yeah. Free program mean mo cash fo weed,” so I downloaded it, an then jus dived head first in on that shit. The first month I be jus killin it, gettin shit done, but afta a month a hearing music broken up into 24 frames per second all stutters an shit, it started gettin to me an makin me sketch out, so I put it down fo like a month, then I be all like “Yo HotRock, is ya doin this shit or not?”An then I be all like ” Let’s fuckin do this yo.”

I initially wanted to get the shit done by early Nov, cuz I knew the peeps a the Earf an the USA was gonna be all fucked up by this election, an gettin back to the first question… I be kinda high rite now yo, sorry… I wanted it done by early Nov to give peeps the chance to like re-center they shit, but that didn’t happen, but I kept workin an workin an the shit got done by early Dec, an as soon as the shit be done, I was all like “Drop that shit now yo.” Do that answer that question?

For all those TL:DR folks out there, what message lies at the heart of Chakra Khan?

Be cool. Focus on the awesomeness that be you homiez. Help them peeps that need that help yo. Find what gonna make ya a be a better you, an then pack that shit in a bowl an smoke the fuck outta it yo.

One of the things I really love about this video is the way the soundtrack shifts subtly throughout the video as you move through the chakras. Was this just you and BEEMaster J? (P.S. Wanna tell us who BEEMaster J is?)

BEEMaster J yo. B like a bong, or a blunt. An all caps on the BEEM, cuz homie be like a BEEM a hope an shit, but spelt like BEEM, not beam, which he prob got his reason fo an shit.

I knew I wanted to start at like 60bpm an move up 10bpm per chakra, so the listener/viewer feel that energy movin yo, so when we was first recordin the vox, me an BMJ built kick an snare patterns so I can hit shit on the beat why we be recordin my vox.

Then him and me jus be all like, “what a sacral chakra sound like”, an he be all like “It shud have a sexy saxophone or some shit.” So we jus went thru an gave each chakra the music an the love it needed to get that love thru to the peeps.

You always seem to have some new idea taking root and blossoming into fruition. What’s next for Hotrock SupaJoint? And what’s next for the man behind the hotpants?

First off, it a chick, my chick, Baby K that be behind them hot pants. She find me all my dope threads, jus like a awesome fluffer/stylist shud. IDK homiez. I wanna drop some new hiphop on the peeps soon… maybe April. I always be thinkin video now, cuz music only be fo the ears, an I wanna grab peeps by all they senses yo. We’ll see. Hopefully my weedman keep me high enuf to think above all the bullshit an keep this dopeness flowin yo. I’d love to do a TV show or some kinda shit to highlite the awesomeness that downtown PHX be poppin now… maybe Imma get my shit together enuf to make that happen. We’ll see.

Make sure to watch Chakra Khan (A Stoner’s Guided Meditation…) below. You can also follow SupaJoint on Facebook.