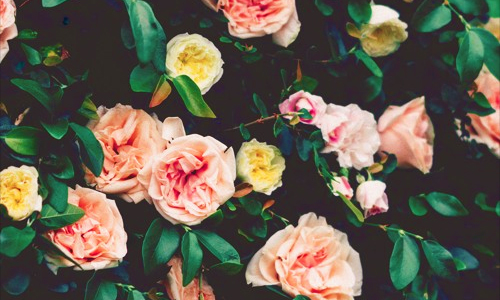 CocoRosie is hard at work on a new album, but they unleashed this single in January to combat the cultural malaise that seems to be the marker of 2017. I’ve been a fan of this Paris-based duo ever since La maison de mon rêve came out back in ’04 so I was super excited to hear a new album is on the horizon. “Smoke ’em Out” features guest vocalist, and fellow “Future Feminist”, ANOHNI. If future freak folk is your thing, I definitely suggest checking out the new single from CocoRosie below. Or, if you’re like me, you’re going to want to add this to your personal library (available here).

All you Draa fans should start getting excited now. The PHX 4-piece are gearing up for the release of a 7″ which features this brand-spanking-new single, “Even in My Dreams (All My Life)”. This dreamy post-pop number addresses the feelings of uncertainty that can arise in these unmapped lives of ours, but it does so in soothing way so as not to give rise to any additional anxiety. The 7″ will be released on March 10th through Funeral Party Records. The Deluxe Edition comes with a cassette of Draa’s Part Time Punks Sessions (previously unreleased) but that bonus is limited so get on that pre-order now.

This is another musical duo, but this time out of Los Angeles. Tashaki Miyaki has a dreamy lofi sound that has me totally enamored. “Girls on T.V.” came out in January as a little sample of the duo’s recently released album, The Dream. As you drift along on the lithe vocals, the garage-tinged indie sound will begin to dissolve into some heavy texturing before returning to its prior permutations, just to keep things interesting. This is a great single for summertime with its casual, cool kid attitude and easygoing melody. Sink into “Girls on T.V.” from Tashaki Miyaki below or head here to peruse the complete LP.

“At Least Not Yet”

Eli Pearl is the man behind the music of Eli & The Itches. A native on the L.A. scene, Pearl grew up in Venice Beach and put in his time honing his chops in the city’s venues before he decided to focus on his own sound. Eli & The Itches is the result of that effort. Pearl assumes a gender-bending persona in the glamrock ballad “At Least Not Yet”. There is an air of drama on this track that Pearl really pulls off without sounding trite. And the music has a supercool swagger to it. Check out “At Least Not Yet” from Eli & The Itches below…

So, stay with me on this, Superorganism is a DIY musical project made up of a Japanese teenager living in Maine and seven of her London-based friends. This super chill single marks the band’s recording debut and I’m guessing we’re going to have to wait a minute for the live experience given the ocean that divides the players. “something for your M.I.N.D.” takes mellow electropop to a whole new level of zen with its trippy but unobtrusive instrumental layers. Let’s hope there are more singles in the works from Superorganism. One just isn’t enough. Give “something for your M.I.N.D.” a spin below…

L.A. transplant Eli Raybon is gearing up for the April release of his LP, Green, with this catchy new single. “Unsymmetrical” hooks listeners with its rapid fire lyrics while the stripped down production proves you can do a whole lot with just a little. The single has an alt-rock/pop fusion feel with some NYC rock club fuzz thrown in for good measure.  Check out “Unsymmetrical” by Eli Raybon below, then head here to add the track to your personal playlists.

The rocknroll 4-piece out of Cleveland known as Christmas Pets crafted this catchy lofi single set for release on sweet 7″ vinyl on March 15th. “Glow” keeps things simple but nuanced with its unpolished sound and gang vocals. There is a raw energy on “Glow” that feels both intentional and authentic – a rare combination, indeed. I’m definitely interested to see what comes next from Christmas Pets and, thankfully, I won’t have to wait too long because March is just around the corner. Until then, enjoy “Glow” below…