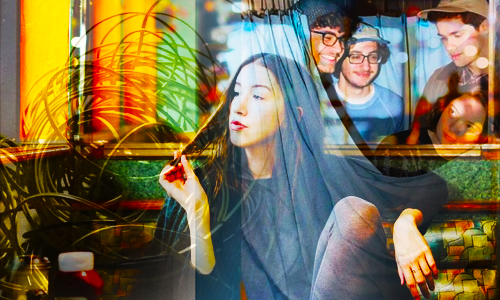 So, Foresteater is one of those band’s that snuck up on me. I heard about them, but I hadn’t heard them until it came around time to work on the 2016 awards. Only then did I learn about Nightlife of the Exploding Heads. For shame, I know. Thankfully, Foresteater is on my radar so I was very excited to discover “Big Deceiver” – a new single from the band less than a year after their debut EP. This track has the effervescent, dreaming-in-space feel that marked the band’s indie sound back in 2016, but I must say, this might be my favorite Foresteater track ever. Bright harmonies lift your spirits, despite the serious implications of the lyrics, while the catchy melody carries you along. Mikey Pro, the man behind the moniker, is doing good things here. Give “Big Deceiver” a spin below…

We featured COTE’s single, “London”, back in September and she’s back to offer up another gem. Cote’s voice is velvet rich, both deep and lithe, and casts out authentic emotive energy on “Cruel” as the instrumentation builds to culmination. There’s a real vulnerability that emerges within the tracks ruminations on loneliness and needful loves. Give “Cruel” a listen below and then head to Soundcloud to check out more tracks available from NYC’s COTE.

The NJ dream pop band known as the Lunch Ladies are releasing their debut LP this coming March, but they dropped this little ditty in prelude to their forthcoming album. “Pick Yourself Up” carries an aloof air within its upbeat indie sound; something cool if not disheartened and a little distant. Listen to “Pick Yourself Up” below and join us in the wait for the Lunch Ladies’ LP, Down on Sunset Strip, which will be released through Good Eye Records next month.

Jillian and the Giants

The Tucson act known as Jillian and the Giants released their sophomore EP, Mr. Airplane, last year and they already have a new single to offer up listeners. “Champagne and Pearls” is a new favorite in my book. Jillian and the Giants is an act known for their amazing story telling skills and this story just so happens to take place on the day the world ends. The indie sound on this single takes on an Eastern European-folk hue – a little different from the band’s buoyant sound. Let’s hope there’s a new collection Jillian is currently cooking up with her Giants. Until then, enjoy “Champagne and Pearls” below…

Let’s get a little rowdy with the Parisian duo known as Yellow Radio. “Cold Cold Shower” has all the energy and style you could want from your indie rock. The single comes from the band’s 2016 release, Night Life. The full album offers this listener a lot of variance from track to track. “Cold Shower” is the song you put on when you’re getting ready to barhop on the weekend or that date you hope ends more Showtime than Disney. Give “Cold Shower” a listen below or head here to preview/purchase the complete album from Yellow Radio.

Despite the West Coast suggestion of this band’s name, L.A. Spring is actually a London-based 3-piece. “Heart and Soul” is a radio-ready number with a bit of New Wave appeal that emerges from the band’s exploration of electronic influences. Sometimes, that retro-synth sound can feel a bit played out these days, considering it seems to be the new hotness, but L.A. Spring manages a refreshingly modern sound that is accentuated by the presence of synths rather than overburdened. Give “Heart and Soul” by L.A. Spring a spin below…

Here we have another duo going for that New Wave synth sound. “Page Nineteen” keeps the energy up on this post-punk / indie pop mashup, but the tone here is a little more aggressive and a touch gloomier. If Oingo Boingo left an absence in your heart, Portland’s Golden Halos just might be able to fill that hole for you. This song addresses the topic of “narcissism and alienation enabled by modern personal technology and social media” so I think Danny Elfman would approve. I certainly do. “Page Nineteen” comes to us from the band’s 2017 release, Farewell Strange Attractor, and you can check it out for yourself below…