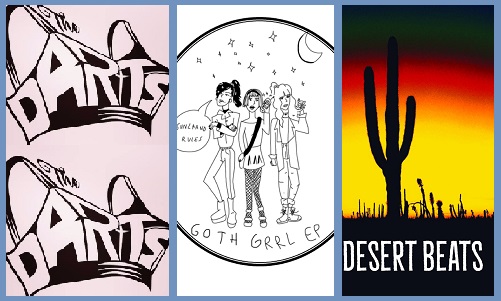 Nicole Laurenne and Christina Nunez are garage rock machines. Having set Phoenix, and the rest of the world, on fire with their beloved The Love Me Nots, they’ve also graced stages as members of Motobunny, Casual Encounters, Zero Zero and more.

They latest venture into the retro world of rock and roll is The Darts, joined by Los Angeles musicians Rikki Styxx and Michelle Balderrama. While they are mining similar territory, The Darts are somehow even rowdier and raunchier than The Love Me Nots. Their self-titled debut is a finely tuned rock machine, from the caveman beat of “Running Through Your Lies” through raveups like “I Wanna Get You Off” and “Revolution.”

This is breakneck, snarling garage rock, like The Stooges if they rocked the hell out of a farfisa. The vocals are sexy and sharp as knives, and sound just about as dangerous.

As fun as the rockers are, some of my favorite moments on the record are when they slow things down a bit. Taking the tempo down lets the intriguing sense of menace sink in, like the thick-as-molasses chorus of “You Got Me,” or the spooky psychedelic sludge of closer “Kiss of Fire.” This music is so spooky they even grabbed a twitter endorsement from Stephen King.

The Darts prove that if you play it with enough grit and passion, garage rock is a timeless force to be reckoned with. Check out the record here, and catch The Darts with Weird Omen, March 7th at the Rebel Lounge.

But none of that would mean a thing if the songs weren’t there, so it’s a good thing that Desert Beats’ main man Randall Dempsey has songs for days. All those stylistic touches are in service of some great tunes, and Dempsey and his Desert Beats crew throw in enough curveballs to keep things interesting.

Lead track “Rumble” gets things off to a killer start, a distorted organ punctuated by drum rolls and a kinetic, Interpol-worthy guitar line. The guitar playing remains a highlight throughout the album, the playing fluid, complex and really fun. Dempsey starts his first vocals with a great hiccup, and fills the rest of the song with peaked-out shouts.

While the rest of album follows a similar style, the band switched things up with flourishes like the “do-do-do” vocals on “Nothing Without You” or the woozy synth line on “Receive The Dark.” And the great backing vocals and harmonies, especially on tracks like “Lost My Way” and “We Can’t Forget,” are a constant treat.

Dempsey breaks away from his standard style a few times towards the end of the record, including on the rockabilly-indebted “Humble Gun” or the closer “People Hurt,” which veers more towards stoner metal, like King Tuff doing “War Pigs.”

But classic garage is what the band does best, and “Wolfman is Here” is my personal favorite, with its propulsive bassline, police siren guitar, and chorus of yelping and howling. Perfection.

Check out the record here, and catch Desert Beats at their dual record release show with Strange Lot, March 4th at Valley Bar.

Though it was released in January, sunlaand’s new four song EP is a perfect summer album. Produced by drummer James Hoag, the record captures the haze that sets in on a really hot day, when all you can do is sit in the pool or inside with all the curtains closed.

Lead track “Pillz” starts things off with the kind of crunchy guitar that would make Johnny Ramone smile, while singer Sara Windom coos and smirks her way through lines like “And I popped pills on the bathroom floor/I drink and then I drink some more/but it’s cool though.”

Bassist Michael Chmura takes over vocal duties on the excellent “Death is Happy,” sounding as bratty and confused as early Wavves records while crooning “Nothing is clear to me anymore.”

A crunchy bass line kicks off “TV Dog,” a fun thrasher that is surely a house party favorite. The band closes the album with the best tune “Bummer Baby,” a breezy ode to troubled teenage love, with Windom totally nailing the chorus of “Tonight I’m gonna sneak you out/Don’t be a bummer baby.”

Disaffected, fun and strung-out, Goth Grrl sounds like the perfect soundtrack to a grainy skate video where they miss every trick. Which someone should totally make happen.

Check out the record here, and catch sunlaand at the Phantom Party Album Release show, March 4th at 51 West.