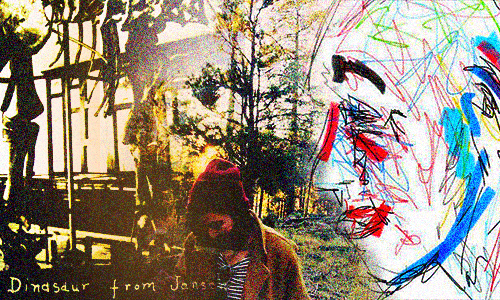 If this is an audiobook, it’s the most beautiful audiobook ever.

On Dinasaur from Jensen [sic], Max Knouse seems to follow a bit of the Jeff Mangum/Aeroplane Over the Sea approach to record-making by creating an elaborate and elusive narrative that plays out over the course of the album.

If you try to view the lyrics through the album’s Bandcamp page, you will be rewarded with a single word (a clue perhaps?) rather than the full story. Although Dinasaur from Jensen counts nine tracks, several of those included are brief interludes between full songs.

It was all the way back in 2014 that Max Knouse knocked our socks off with The Hasty Escape (his band) and their album, The Filthier Things. You can hear elements of Knouse’s earlier work – that windswept Americana, the entrancing harmonies, the stellar guitarwork – but this new undertaking is a bit stranger and no less engaging. It’s impossible to pick a “favorite song” from the album. Dinasaur from Jensen should be consumed in its entirety in one sitting, not piece by piece. However, I will say that “Bottle Submerged” had some favorite moments for me.

We heard Delafaye’s first single back in November and then we covered his next single the following month. So, of course, we were just about counting down the days until we could hear his complete debut EP.

The Hilltop dropped on January 27th through the British label Street Mission Records and, I must say, Delafaye is the perfect fit for a London label. His music has a somber, English sensibility and he keeps the focus on songwriting at its core; placing authentic expressions of emotion over catchy hooks and substance over glitz.

“Time and Money” opens The Hilltop; a somber, reflective number that I find as comforting as hot coffee on a bone-chilling morning. “Rain” follows and you’ll start accurately assuming that the EP will continue along this meditative path to its conclusion. Delafaye is for those peaceful, pensive moments. “Dreamers”, my personal favorite, comes next before “Thinkin of You” closes out the album.

Just in case you missed those earlier reviews, Delafaye is the musical moniker of Kentucky songwriter Andrew Shockley. Let’s all hope for an Arizona stop on his next tour. That’s a ticket I would purchase.

Until then, you can check out the new single, “Rain”, from The Hilltop by Delafaye below or head to iTunes or Spotify for the complete EP.

Despite the hundreds of submissions we receive every week, I still like stumbling around for some heartfelt bedroom indie as a much needed break from the glitzy, production-heavy singles we get flooded with day in, day out.

Without Youth has just that sort of refreshing sound I needed to soothe my PR-weary soul: honest and simple yet poignant. Something more a little more promising than polished. There’s warmth in the four tracks found on Seasons; the duo’s latest EP which came out in January.

“Rooms” opens the EP and establishes a dreamy feel for the rest of the release. Liz Christy’s voice matches that dreaminess with her breathy, almost sleepy, vocal style that shifts from pensive to airy. Devon Hancock is the other half of the musical partnership that is Without Youth. Hancock occasionally joins in singing duties to add casual harmonies on tracks like “Take III” which, btw, is a personal favorite from the EP because of its rich, almost-gritty instrumental texturing. “Between Love and Hate” closes the release with a 5+ minute meditation on, well, love and hate and how one can transform into the other.

If you dig the intimacy of bedroom indie pop, I suggest delving into Seasons from Phoenix’s Without Youth below…