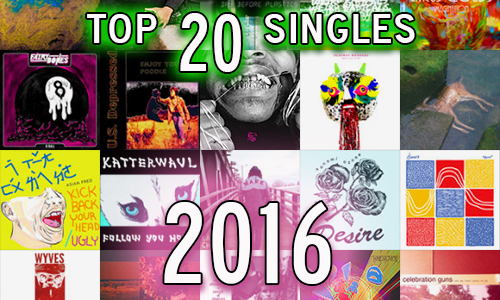 The experimental noise act known as RNA released Between The Mountains and Us on Jan. 1st of 2016. The ruckus release included the stellar single “Delta” which mixes a sludgy sound with high energy guitar antics.

19
Aesthetically Sound
“In My Feelings”

This mellow R&B track from Aesthetically Sound dropped eleven months ago, but its haunting sound stayed with all year. Intimate and heart-wrenching, “In My Feelings” sets a mellow mood best accompanied by wine and unabashed sobbing.

I probably shouldn’t start with this, but I’m always surprised by just how much I like the music of Day Before Plastics. Maybe it has something to do with the titles they choose. I always go in thinking, “This might be okay,” and then I’m blown away. The title “Hot, But” does not prepare you for the deep level of introspection supported by the band’s incredible musicianship.

Despite being relative newcomers on the local scene, Weird Radicals made quite a splash with their debut release, Strictly Business, which dropped in December. Their single “Medea” uses nostalgic 90s guitar and vocal effects with modern indie modes of music-making for a catchy single bound to get stuck in your head for days (fair warning). Maybe that’s the magic combo that put Weird Radicals on the PHX music map so very quickly.

This single is the title track from Citrus Clouds’ November full-length release. And, since I’m the one doing this write-up so no one can tell me what to say, I really thought the album deserved additional acknowledgement in our 2016 awards. Alas, it was a big year for local music so a few stellar releases might not have received all the accolades they warranted. The band adds a dreampop glaze to their garage indie rock sound by coating it in a shoegaze haze. So good. So so good.

The title track from Wyves’ February release has all the rowdy, barroom energy you want with your rocknroll. “Spoils of War” has a retro rock vibe (think late 70s) that meshes so very well with the band’s devil-may-care attitude. And they put on a stellar live show too.

Songwriter Damon Dominguez first impressed us with his lyrical prowess back in his Leonardo DiCapricorn days. So, after that band ceased to be, we were super stoked for the launch of Sonoran Chorus. “Cartons of Bottles” brings back that supple songwriting with feisty, punk-tinged, indie rock energy.

13
Emby Alexander
“In Your Doorstep Bleeding”

This is my favorite Emby Alexander song. Ever. And when you consider that the band has been performing together for almost five years now, that’s really saying something. “In Your Doorstep Bleeding” has a breezy indie pop sound that will immediately draw you into the heart of the track: those simple, but painful lyrics.

This single comes to us from Nightlife of the Exploding Heads, the debut EP from Foresteater. “Very Friendly People” combines an infectious grove with tight harmonies for a refreshingly unique indie sound. Foresteater just broke onto the scene in 2016 and we can’t wait to hear what’s in store from this band in the year to come.

The effervescent indie pop of Celebration Guns really comes through in high shine on their 2016 single, “The Volunteer”. This tracks comes to us from the me that used to be, the band’s April release. The orchestral layers of instrumentation distract the listener from the gravity of the lyrical content. It might take a few listens for the meaning to sink in after the dancing subsides.

Um, wow. Fairy Bones had a good thing going on their debut s/t release, but in the years to follow, the band really stepped up their game. Together, they honed their sound into something unique and uniquely powerful. “8-Ball” dropped last year along with another stellar single, “Pink Plastic Cups”, so choosing a favorite between the two was a trial in and of itself, but the playfully aggressive self-loathing on “8-Ball” won out in the end.

9
US Depressed
“Fault and Pepper Salami”

The punk rock supergroup known as US Depressed features members of such other acts as JJCnV, French Girls, Skink, and The 16 Eyes. The band released a few singles last February including this gem. “Fault and Pepper Salami” fuses raucous post-punk with a witty if bellicose lyricism.

8
Injury Reserve
“All This Money”

Damn, Injury Reserve, this track is off the hook. Anytime we’ve played this track down at YabYumHQ, every person present immediately launches into a club-style dance party. The hook on “All This Money” is so fucking sick, I dare you not to dance. This is grimy HipHop at its best.

7
Playboy Manbaby
“You Can Be A Fascist Too”

This single is the first track of Playboy Manbaby’s forthcoming release, Don’t Let it Be, which should be hitting fans any day now. “You Can Be A Fascist Too” takes the rambunctious fervor that Playboy Manbaby is known for and adds a more strident focus on lyrical content for a winning number. I can see all the fist-pumping sing-a-longs to this song at shows to come throughout the year ahead.

The vocals stylings of PRO TEENS frontman Andy Phipps has air of sullen disinterest – perfect for a song titled “Puberty”. When you add to that the retro garage pop musicality, you have the makings of a stand-out single. “Puberty” comes to us from the band’s 2016 release, Accidentally, which dropped last summer.

5
Asian Fred
“Kick Back Your Head”

How do you write music like this in the present day and age? Something retro-styled and yet so totally fresh? Somehow the act known as Asian Fred manages to craft outstanding tracks every single time they put pen to page (pick to string?). “Kick Back Your Head” was part of a two-track single released by the band last June. And, honestly, either single could appear on this list. We can get enough of Asian Fred’s stellar psych pop.

Katterwaul is one of my all-time favorite Arizona acts so I was a little bummed they didn’t release an album this past year. BUT the band did offer fans two sweet singles on a 7″ split they put out in March through Tucson’s Wooden Tooth Records. “Follow You Home” grabs hold of the listener with its spirited desert rock from the very first note and doesn’t let go.

The chill vibe of “Coroner” lulls the listener into a meditative calm before the lyrics begin their descent. Get ready for an introspective journey with Lando Chill. This single will leave you somber and reflective and it won’t leave you alone thanks to a subtle yet effective hook.

Picking a favorite track from Nanami Ozone’s debut release was a real son of a bitch. We spent an embarrassing amount of time arguing the merits of various tracks on this release because they’re all just so damn good. Finally, in a mix of desperation and conviction, we decided on “Sonny Bono”. The interplay of vocalists, the stripped down garage rock, and that hopelessly cool Nanami Ozone lyricism all make “Sonny Bono” one of the best songs of the year.

1
Diners
“Fifteen on a Skateboard”

The dreamy layers of sound merge with the sugary innocence of Diners on their single “Fifteen on a Skateboard” in such a way that perfectly epitomizes the band’s style. Rich vocal harmonies carry the uncluttered lyrics while the instrumentation surrounds the listener in a sea of soothing sounds. Diners delivers indie pop at its very finest.