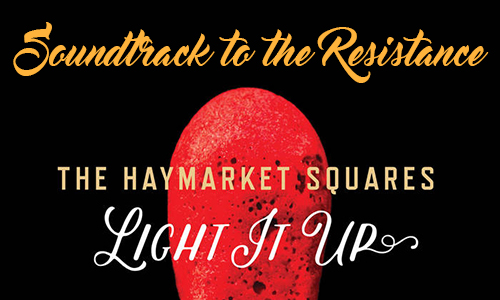 Arizona’s favorite punkgrass band released their fourth LP, Light it Up, this year just in time for one of the most horrifying election seasons in American history. Coincidence? We think not. The notoriously clever Haymarket Squares are just getting us ready for the grassroots resistance movement that is about to sweep through the nation. At least, we really hope that was their plan all along.

The only thing that stands out on Light It Up more than the message is the music itself. The players who make up The Haymarket Squares are stellar musicians that could earn top marks at any grizzled bluegrass competition. Add to that enough revolutionary spirit to fit in at any Under the Bridge Festival and you have the makings of one of Phoenix’s finest musical endeavors.

So, if you find yourself getting discouraged at the thought of waiting out the impending paradigm shift, we recommend spending some time with the Soundtrack to the Resistance to bolster your revolutionary spirit. Light It Up by The Haymarket Squares is available through Bandcamp and make sure to catch their video for “Let’s Start A Riot” below…

Original review of Light It Up by The Haymarket Squares