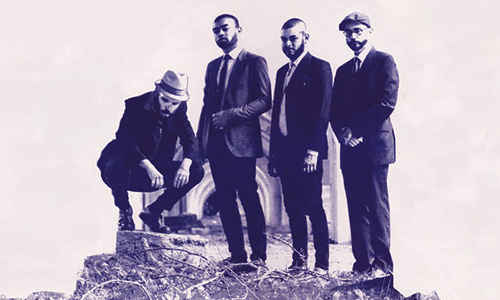 For some us, the moment we hear the “upbeat” stroke in music, we’re done. I mean, we’re wrecked, nothing else will come close to providing that joyous feeling music can bring – for when it hits, you feel no pain. Here are some the island-inspired bangers that have floated my way recently.

“Nothing More To Say”

The Frightnrs, man, what a story. After clubbing it in NYC for years they finally get signed to Daptone Records only to have frontman Dan Klein pass away from ALS. Not before managing to complete their album, however – the tragically and beautifully titled, Nothing More To Say. “Nothing More To Say” is classic rocksteady. The finest of early dancehall. And it seems to capture the spirit of The Frightnrs at their best. If you like this, make sure to dive into their whole album on Bandcamp.  They’ve vowed to keep going, and indeed they have. Check out a brand new live video on their website.

Ken Boothe is a rocksteady legend, affectionately nicknamed “Mr. Rocksteady”. He’s just that quintessential. His first solo, and number one, recordings for Clement “Coxsone” Dodd’s Studio One label in Jamaica were in 1966 (with a little group called The Wailers as his backing band), and before that he was in a duo with Winston “Stranger” Cole releasing ska hits in the early ’60s. This is why I was so excited to come upon “Gun Gospel”, a track made with relative newcomer Blood Seed. Boothe delivers his signature timbre on the hook while Mr. Seed delivers a poignant message on Jamaican gun culture. Released on Upstir Records in St. Thomas, Jamaica, “Gun Gospel” is the real deal and should be heard by all rocksteady fans.

Delivering a classic roots reggae style with a modern twist, Tales of Joy bring the positive energy from New Fairfield, Connecticut. “Say No Way” is a calling out to all those who would dare try to bring down the Tales of Joy vibe. If you enjoy this track, I highly recommended checking out their debut EP, Breathe Easy. In the vein of John Brown’s Body and Slightly Stoopid, this is one future roots band I’ll be keeping my ear on.

The “Lovers Rocker” Courtney John is back and this time he’s teamed up Paris-based music collective Soul Sugar’s Gee Recordings to create the infectious single “Strangers.” Courtney’s smooth falsetto vocals carry the song, reminding us to keep our guard up to the strangers that are all around us and would want to see us fall. The production by Guillaume “Gee” Metenier is simply stellar as well. Not only does he play organ, bass, and other keys on the track, he’s assembled an all-star cast of both Paris and worldwide musicians to create an amazing catalogue of reggae/dub/jazz/soul singles. Check out more through their Bandcamp page.

Hailing from Trinidad and Tobago, Nex Chapta’s “Good Morning Rasta” is social commentary set to head-nodding rhythm. Although grounded in traditional reggae with the bass and drums, the use of acoustic guitar on both the rhythm and lead traverses the song into reggae-fusion territory. Don’t let that dissuade you from this song however, it’s more future-roots than UB40. “Good Morning Rasta” is pure bliss in our continuous troubling times, lead vocalist Johnson “John G” Greenidge singing, “Jah know the children must live/Cause wisdom comes from the mouth of babes”. Make sure to check out their first-ever single “Good Morning Rasta” below.

Now normally I’m not one to enjoy the sugar-pop reggae sounds (or “Reggae Light” as I like to call it) of many contemporary artists. However, with HIRIE’s new single, “Ride The Wave”, I find one noted exception. First, her voice is quite remarkable: soulful but a little playful as well. The lyrical content is uplifting while remaining grounded. Second, the production doesn’t get too heavy-handed  which is great because there’s nothing worse than highly polished garbage. Third, the entire band is solid: funky bass and a tight horn section along with those perfect upbeat chords. Maybe it’s the fact that HIRIE grew up in Hawaii, but whatever the reason, she creates a relaxed vibe to the perfect groove of “Ride The Wave”. Give the single a listen below…

John “Upryzin” Curry has created a track “written, recorded, & dedicated to long time friend and CEO of This Is A Good Sign,” a global movement focused on positivity and uplifting change throughout the world. “GoodSign” is ethereal and emotive, Upryzin’s vocals approach yearning almost as a whisper. And the instrumentation is sparse: two acoustic guitars atop a hardstep beat and sub-destroying bass. Definitely looking forward to what lays ahead for both Upryzin and This Is A Good Sign. In the meantime, listen to “GoodSign” below.

Proving that reggae truly has gone all around the world, Organico Ridotto out of the Italian region of Abruzzo have just released “Maria Nicola”, a reggae-dance number I couldn’t help but like. That sly minor key mixed with jazzy horns and Hammond organ sold me. I also enjoy many of the vocals as well, although I must confess, I have no idea what they’re singing about. It could be the worldwide destruction of this entire planet for all I know but, somehow, I doubt it. Check out “Maria Nicola” for yourself below.