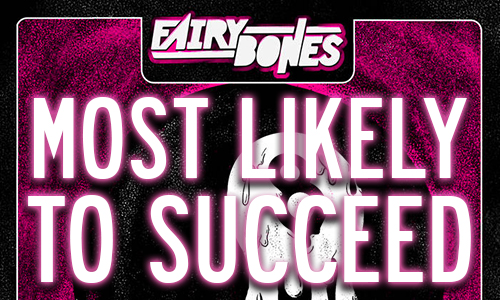 Fairy Bones might have been a point of musical contention amongst the staffers here at YabYum in 2016, but one undeniable fact remains: this band is poised for success.

And I know you might be thinking we’re attributing this position to the band’s smart social media methods or their out-of-this-world music videos, but we’re not.

The reason Fairy Bones are this year’s Most Likely to Succeed is because the band keeps it pushing. There is no stagnation here. With their freshman s/t EP and follow-up release, Dramabot, we heard them in the early stages of their developing sound. It was raw and powerful.

This year, fans got two more singles from the band; just a taste of their ever-advancing stage show. And I must say, while I was a fan of the band beforehand, these new tracks speak volumes for what is possible when musicians continually strive to move their sound forward.

The power is still present, but the rawness is more refined, more cohesive, and the lyrics have that wry wit and emotional honesty that first distinguished them in my mind from other acts making the rounds.