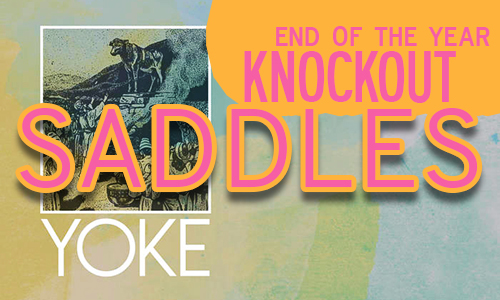 Ask any music writer and they’ll probably tell you that December is the worst month of the year to release an album.

This is the time of year when music publications are focused on re-visiting favorite albums of the preceding months for those end-of-the-year lists while fans are caught up in the flurry of end of the year tasks, visiting friends and relatives, and, of course, the holidays. Basically, people are too busy to allot the appropriate amount of time to new music.

Hence, a lot of December releases that deserve attention often get overlooked in the muck of the month. This year it was Saddles’ recent LP, released December 15th, that almost slipped past us unnoticed.

YOKE is a ten-track album (plus intro) that combines elements of drone, folk, and indie rock with experimental electropop for a surprisingly listenable result. Oftentimes, when you put all those words together to describe one band, you end up with something a little muddled; more of a think piece than an album you want to play on repeat for an entire day.

Saddles manages to attain both ends of this spectrum on YOKE: a think piece you can mellow to all day. The album should be listened to whole in order to best appreciate the relaxed fluidity that connects all the disparate permutations in the tracks. Saddles connects the musical dots with such ease that the shifts can gently pass by unnoticed until you’re into the full swell of a different sound.

The album sort of snuck up on us as the year dwindled down, but we had to take a moment to acknowledge this outstanding efforts from the duo known as Saddles. If you haven’t had a chance to check out YOKE since its release a few weeks back, I suggest you do so now…