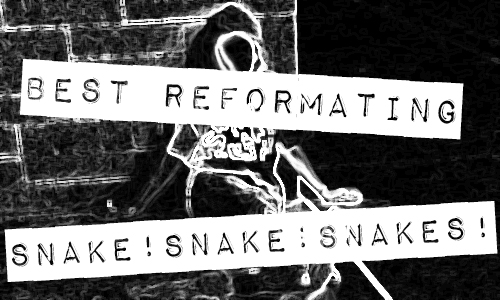 Snake! Snake! Snakes! came into being back in 2010, and since then, the band has undergone several transformations in sound since the orchestral indie rock of their s/t debut.

And, this year alone, Snake! Snake! Snakes! released both an LP in April and an EP in December. When you listen to both albums back to back, you can get a strong sense of the new direction the band is taking: something a little more spirited with a lot more grit.

While we got our first taste of the developing sound on Tranquilo which was recorded by Bob Hoag at Flying Blanket Studio, the latter of these two 2016 releases, Wait Up, charges straight from the garage toward your ears with infectious energy and a sound that fuses crisp retro rocknroll with contemporary modes of fuzz to achieve something ultimately cool and totally relevant to modern listeners.

Recorded by Matt Rendon at Midtown Island Studios in Tucson, Wait Up will probably prove to be just another stepping stone in the ever-evolving sound of Snake! Snake! Snakes!, but to date, it’s one of their best moments. The EP is available here for your listening pleasure…