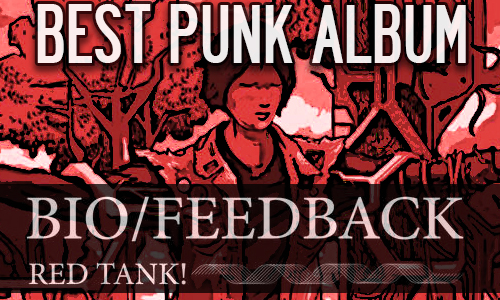 The ruckus energy of Red Tank! really comes through in their 2016 release, BIO/FEEDBACK, which came out last August. The album contains ten tracks of rowdy noise punk that will suck the angst right out of your ear holes.

According to their Bandcamp page, Red Tank! crafts “dystopian punk for millennial scum” and we find that to be a rather apt description. The post-human aggression runs high while the oscillations in sound structure have a fresh, modern feel.

Smart but intentionally devolved, BIO/FEEBACK plays with dissonance in arthouse style, but there’s still enough variance within the tracks on the album to keep things interesting right to the very end.

The album was recorded at Audioconfusion by Jalipaz and is available for your own personal collection (in cassette or CD form) here.

Check out our Radio Phoenix podcast with Red Tank!