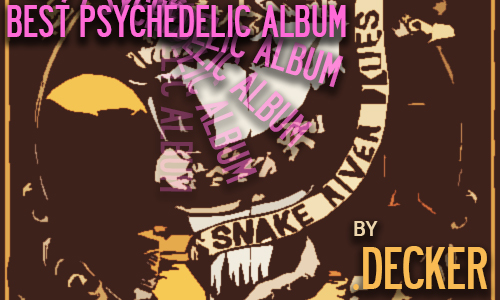 The Sedona act decker. is known for continually pushing their sound in new directions with each and every release they put out. The year 2015 brought us Patsy, an introspective folk masterpiece, and the band returned again in 2016 a little rowdier but with the same fervent intensity that first put them on the music-making map.

In just five short tracks, decker. takes us on a desert vision quest through the dusty reaches of our souls. This is psychedelic folk rock at its finest. The questions posed by the album are pointed and prompt self-searching. And, for some reason, the music on Snake River Blues makes me want to put on a long, flowing skirt and writhe around in some mescaline driven flurry next to a bonfire as it threatens to consume the entire world. But maybe that’s just me.

decker. has long been a sweetheart of YabYum, ever since we caught him live at a songwriters’ showcase in Sedona all those moons ago, and I have to say that Snake River Blues stands out as a testament to why the band first captured and then held our attention all through the years. They’re just that damn good.

Come out to awards show on January 14 at The Trunk Space to catch decker. performing live because if one thing exceeds the band’s ability to craft a quality album, it’s their stellar showmanship. More info on that event here.