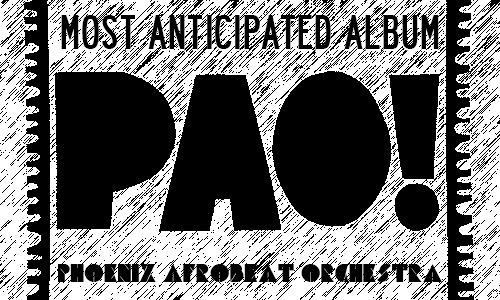 The album was recorded by the good folks of Five Thirteen Recording in Tempe. I don’t even want to imagine how they packed all sixteen PAO artists into the studio. Although, I guess, at the time of the recording, there were only fifteen players in the band, but still…

And, of course, Phoenix Afrobeat Orchestra released the album in high style at the Crescent Ballroom. Matty Steinkamp of Sundawg Media was on hand to commemorate some of the fun with a live footage montage set to the single, “Oppression Scatter”, available for your viewing pleasure below.

The album is available on vinyl or CD through the band’s website here. And Phoenix Afrobeat Orchestra is, without a doubt, one of those bands you simply must see live. You can do that on January 14th when PAO will crowd the stage of The Trunk Space for our 2016 Awards show. More information on that event is available here – don’t miss out!