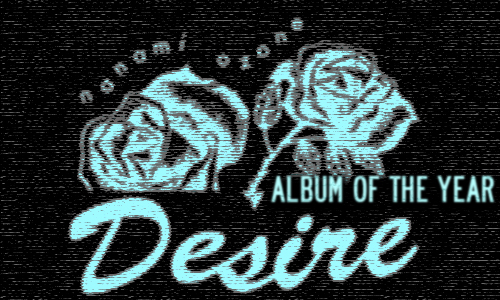 When Nanami Ozone released Desire, their debut full length album, in May, they pretty much set the soundtrack to our summer. And, by the time autumn rolled around, we were still jamming out to the indie rock collection. We sent out links to this album and played singles from this release more than any other release of 2016.

Nanami Ozone crafts aloof indie rock with just enough garage grit to keep things cool. Perhaps what I like most about this album is the way the band confronts the disaffection of a generation head on with an almost painful vulnerability.

Desire is smart, entrenched in contemporary modes of music-making, and  totally fresh. If you haven’t already heard Desire by Nanami Ozone, make sure you give it a spin immediately. Like now. You should also check them out at our 2016 Awards Show happening at the Trunk Space, this evening at 6 PM!