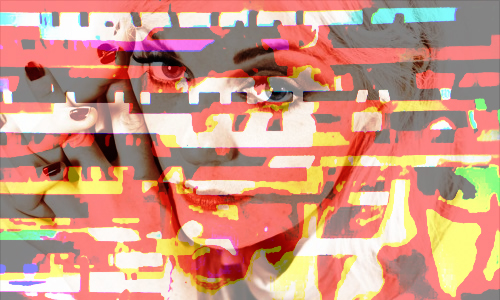 This duo out of Austin fuses grungy rock and retro synths for a feisty garage pop sound I can really get behind. “Hey Hey!!” might have you questioning my powers of evaluation during those first 45 seconds, but I promise you good things if you hold strong. As soon as the “Heys” kick in, you’ll be sold. There’s a fullness of sound that one might not expect from a two-person act, but it’s there. Grimy, layered pop that’s totally modern in its breath. Art Pop is looking to build some momentum before they head out on tour so toss some local love their way and maybe we’ll see a Phoenix stop (Phx/Flag/Tucson, maybe?). Listen to “Hey Hey!!” here…

This single comes to us from Femny’s forthcoming release, due out later this month. “Duck Jesus” has a slinky vibe that calls to mind 70s lounge acts, but Femny incorporates that vibe into a modern indie pop style. And the almost sulky vocals really make the single stand out with its contemporary touch of antipathy. Check out “Duck Jesus” below and join us in the wait for the rest of Instant Star which is set for release on Jan. 27th.

This mellow indie single sneaks up on you. It begins with a stripped down sound before amping up the orchestral pop for stunning effects. The track continues to oscillate between these two modes for the remainder of the song. Quiet the Pilot out of Los Angeles craft a quiet (and I’m not talking volume) indie pop that will sweep you up in its shifting sea of sounds. Listen to “Bikes” below…

Twin Ponies dropped a 4-song split release with another Valley favorite, Dent, on December 30th. “Name Tag” comes to us from that release. The single starts with an extended dream sequence that carries the listener along gently through shoegaze-y sounds. And, just when you think you know how this story is going to end, the sound erupts after three and half minutes into total turbulence. And I mean that in the best way possible. Listen to “Name Tag” below and don’t forget to check out the full Dent // Twin Ponies split (available here).

The smokey-sweet vocals of Pyschic Love frontwoman Laura Peters really shine through on “Red Sun”, a single from the band’s 2016 LP, The Hive Mind. Dark but dreamy, “Red Sun” fits well with the band’s self-proclaimed “dream grunge” style. This three-piece from Echo Park is definitely a band to keep an eye (or ear) on this year. Listen to “Red Sun” by Psychic Love and, if you dig what you’re hearing, head here to add the complete LP to your collection.

The Redemptions released two new tracks under the portentous titled, The Worst. Summer. Ever (Side A). That implies a Side B is coming, right? “Call It” is the first single from the aforementioned Side A and features the trademark vocals and retro rock that first put The Redemptions on the map with their 2016 debut, Broken Hearts and Shattered Glass. Listen to “Call It” below and then make sure you stick around to check out “But Anyway”, the second single from The Worst. Summer. Ever (Side A).