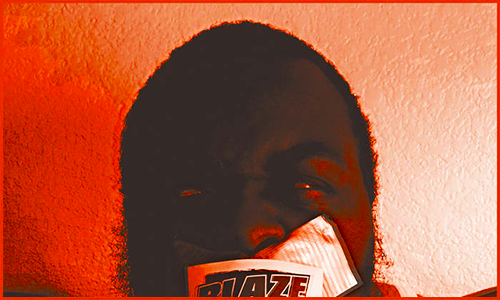 Oh, damn. Blaze Rock is gearing up to unleash a new album on Feb. 3rd. In prelude to Things Left Unsaid, the PHX emcee shared this stand-out single. “Oh Lord” lays his sharp lyricism against a hard-hitting rhythm made even more powerful by the added texturing of vocal flourishes. Check out “Oh Lord” below and then start counting down the days until the February release of Things Left Unsaid.

Pellican Child is the musical project of Louis the Child and Pell (Pellican Child, get it?). In their debut single, “Turn Me Down”, the duo establishes a summertime vibe with their lithe, carefree beat and easygoing rhyme style. This is a promising start to a (hopefully) long and beautiful musical friendship. Listen to “Turn Me Down” by Pellican Child below…

The PHX MC known as Tok Sik writes and produces his own music, but don’t expect any played-out, bedroom beats here. Tok Sik takes a chillax beat and layers on some sick rhymes for his latest single, “Real Life Cartoonz”, which comes to us from his debut album. Give the single a spin below and join us in the wait for Off the Record. The full album drops on Jan. 27th!

This single comes to us from the Bait EP from Phoenix artist Frescotoldya. Bait is but a taste of what’s to come from the forthcoming Great White Shark LP. “Make It Official” features the slick vocal stylings of Blacc Anubis to help set up that steamy make-up sex vibe of this track. This track is (officially) the first single from Great White Shark. Give “Make It Official” a listen below…

OG Big Game is part of the O.G. Hill rap crew out of Georgia. And, in truth, this track pretty much sold me on the name before I even heard the stellar rap skills of OG Big Game, but I’m a nerd like that. Of course, once the emcee started laying out the lyrics, I was locked into “Super Sayian”. The beat on the track doesn’t go in for studio punches on the production end, preferring to keep things simple and focused on the track’s resounding strength: OG Big Game’s rhymes. Listen to “Super Sayian” here…

I’m not exactly sure what we’re supposed to call this Phoenix artist, but I think that’s important information to have, especially considering this is an artist I’m going to want to help spread the word about. Is it a phonetic spelling, like “roast beef au juice”? Seems more likely that the name might be in reference to gold’s symbol on the periodic table. Should we call him “gold”? However, you reference Au verbally, his new single “Gotta Ball” will prove worth the mention. A strong rhyme style vacillates between slouchy and smokey to power-punching. Give the single a spin below…

Stik Figa, an emcee from Topeka, will be releasing Central Standard Time on the 27th of this month on the Tucson label, Mellow Music Group, but you can enjoy some early preview tracks before the complete LP drops. “The Ends & Outs” is one such sample single. An easygoing rhyme style and sharp lyrical ability coalesce for a chill number that will get your head bobbing. This is an enticing taste of what’s to come. Give “The Ends & Outs” a spin below and then head here to secure that pre-order status.