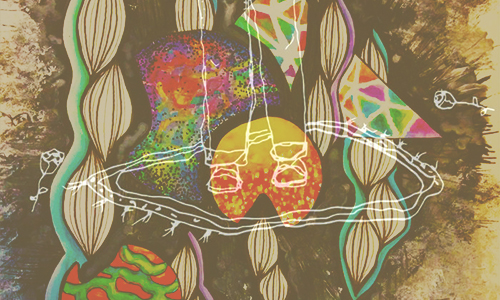 What happens when you take the somber yet stellar songwriting of Justin Moody and throw in an ensemble sound? The answer is Miss Moody. Pensive lyricism floats over a fuller sound without sacrificing the minimalism that first enamored us to Moody’s songs. Each track is soft-spoken and beautifully crafted. I can’t even pick a favorite although I tend to vacillate between the dreamy yet subtly aggressive title track and the hauntingly depressive “Strange”. Or maybe “Kisses”, the heart-wrenching closer, will inevitably take the lead. Ugh, choose your own damn favorite. You Owe Me was released through Moone Records and is available for purchase here. Or take a minute (or 20) to preview the EP below…

This surf-punk two-piece out of Portland released their six-track cassette back in November through Phoenix’s Cat Shit Records. Funeral Gold offers listeners grungy garage rock gold on Everything Hurts. The EP opens with the mellow number, “Breaking Rules/Hanging Out”, but don’t let that woe you into thinking that this is going to be another shoegaze-y groan. The energy gets turned up by the second track, “Work Hard/Play Hard”. There’s enough variance between songs to keep things interesting, but every track is richly (and roughly) textured. Preview Everything Hurts by Funeral Gold below or head here to score your own cassette copy from Cat Shit Records while supplies last.

The Tempe psych alt-rock outfit known as Ancient Egypt has been making the rounds on the local circuit for several years now. So why are we only covering them now? I.DON’T.KNOW. Somehow the band’s latest EP, PLAGUED, landed on our list, and before I made it through the first track, I was hooked. There’s a 90s vibe to the music and, for once, I don’t mean that in any sort of negative way. Ancient Egypt captures some of that summertime, 90s alt-vibe without sounding dated. That alone is an accomplishment worthy of note. A slightly psychedelic hue permeates PLAGUED, especially on the track “Away” which feels like it’s swimming toward the listener. Favorite songs from the album include “Canned Food” wherein the band stretches out their storytelling skills and “You Don’t Care” which pairs pensive lyrics with a playful melody. But, really, this album is pretty stellar from start to finish. Make sure you give PLAGUED by Ancient Egypt a listen below…