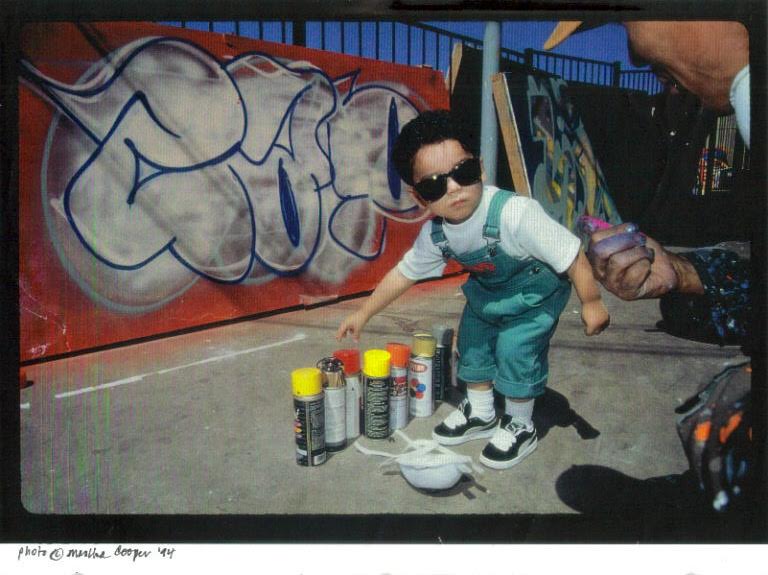 All photos courtesy of Champ Styles

Champ Styles, the son of AZ Graff Pioneer: Such Styles

I’ve been scribbling since 3 months, but as of Graff it was when I was in 5th Grade (2003). I fell into some trouble and was grounded. My dad was tight but by no means ridiculous. I could only watch documentaries for entertainment. So amongst the Nat-Geo VHS and Biblical history movies, I stumbled upon the acclaimed Henry Chalfant feature: Style Wars in my dad’s cabinet.

Now, I had always been around graffiti and the train yards since I was born, I practically had Krylon running through my veins. Hell, I was already dubbed the name, “Champ” when I was in the womb. But it was when I saw those Subway Cars going by done by The Legends such as Zephyr, Crash, Sonic and many more. It was then that “Champ Styles” was born.

Aside from all that, it was my entire childhood: I fondly recall New York’s Killa KA ONE was picking me up at my bus stop. Fyce, Tackz (AM7) and Kaper were always at the house especially during the holidays. I would always see their work and try to do what they did. I remember one time Lalo Cota let me draw dinosaurs in his blackbook. Honestly, I can go on and on. 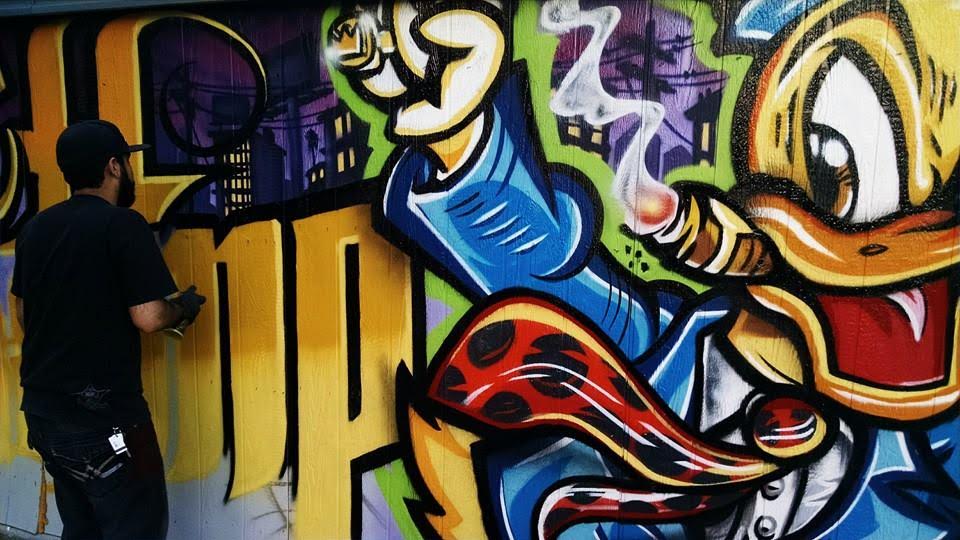 My Father, nuff’ said. See, to me, Graffiti is a family thing. Some kids play football on Thanksgiving, others pick up a Nintendo controller, my pops and I pack up some spraycans and go paint a wall.

What I am constantly drawn to admire about Arizona is the history, there is a lot here and the culture is rich in many aspects. It is deep in the Chicano Lifestyle and you cannot forget the Native art which is breathe taking. The Architecture, landscape – take your pick, basically there is a lot to look at in Arizona.

But in terms of Graffiti also the depth is insane (I’m not talking the street art craze either). I’m talking about the gully work from back in the 80s (since 1983 to be precise). I could take you to spots and remnants of walls that still have some *vintage* scrawl on them, it’s all here hidden in plain sight. 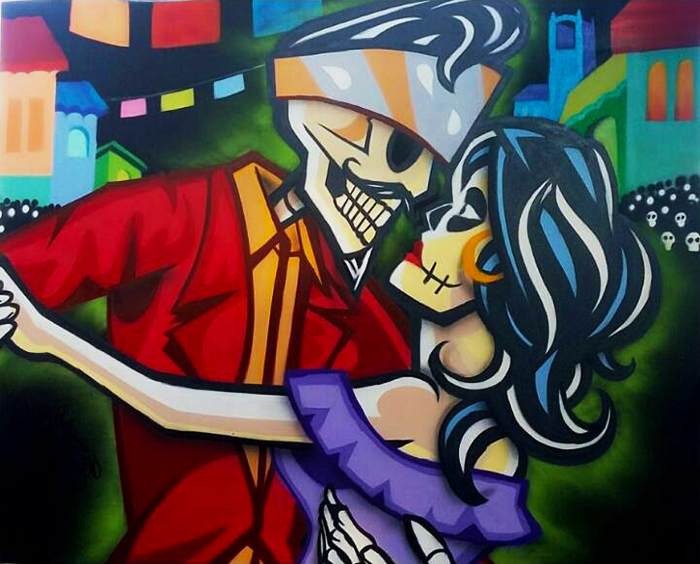 In terms of current wall-work there is The Town of Guadalupe, on Priest between Baseline and Guadalupe. You can see a mural I did with my dad and NY Subway Legend Zephyr. There are a few walls there as well as a few on 5th and Roosevelt, my latest being on the side of the Lost Leaf featuring Subway favorite: Howard the Duck.

My Father and I have painted the backdrop to the HipHop exhibit at the Musical Instrument Museum and of course you can see my work frequently at the Mesa Arts Center. I’ve also done work for a few schools such as Alhambra and Marcos De Niza.

To pass on the legacy not just by means of my own blood but in terms of preserving the style and the lifeblood of the culture. Graffiti is a way of life, not a fad and should be acknowledged with such respect.

“Why create a mural when you can create an attraction.” 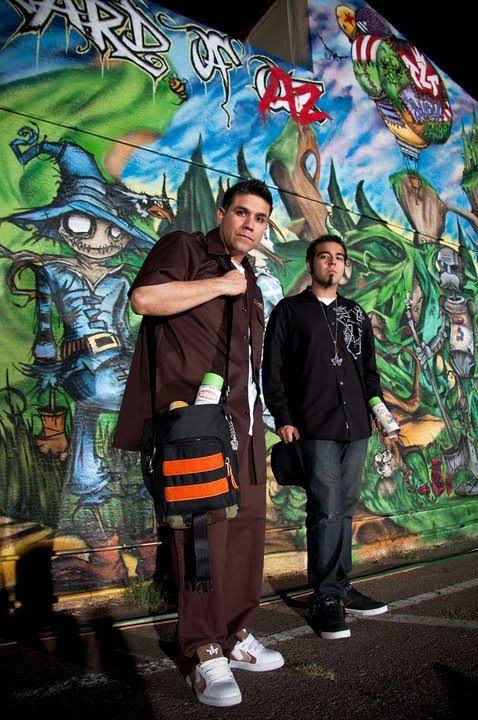 Pictured with father and artist Such Styles 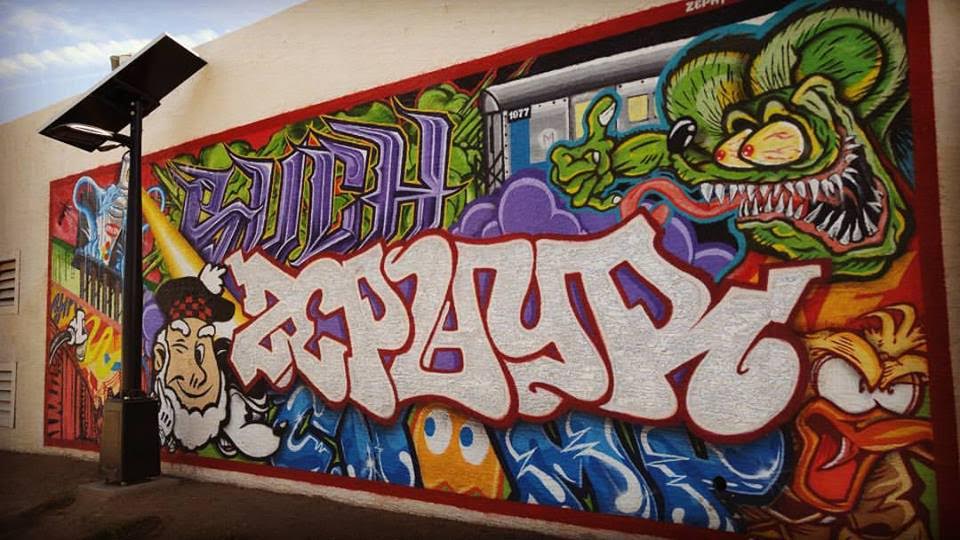 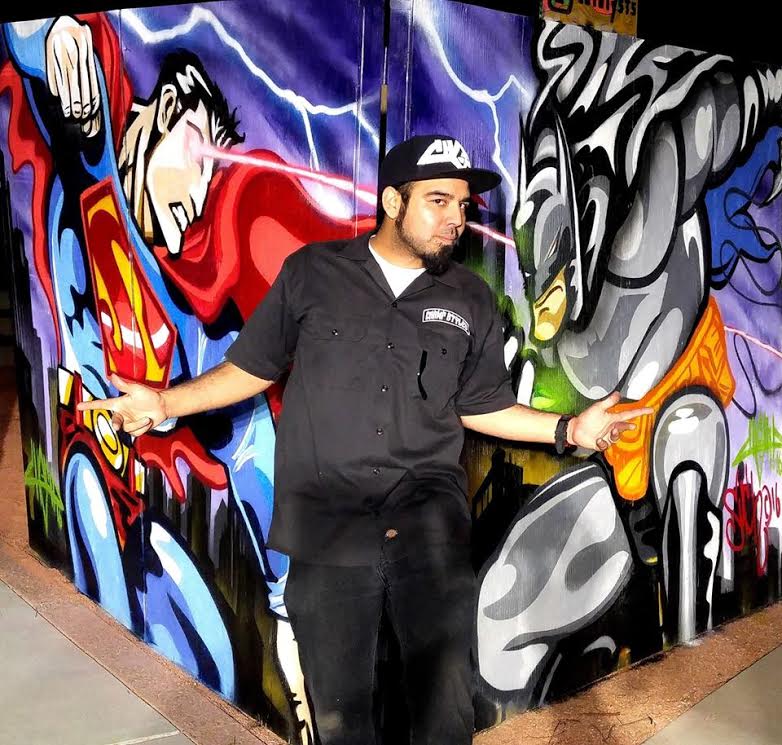