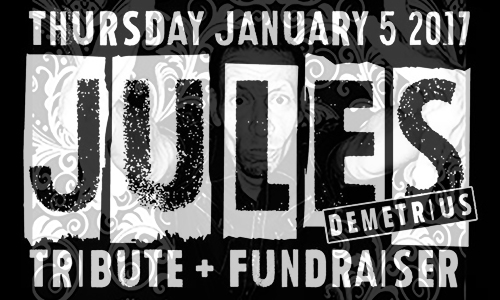 For many of us, 2016 was filled with an incredible sense of loss. From musicians to silver screen icons, it seems as if our daily news feed revealed another hero snatched away from the world we know every week. But, for Phoenix, the death of Jules Demetrius stands out as the most personal and heart-wrenching loss faced this year.

Throughout his long battle with cancer, Jules continued to pursue his true calling: ART. Jules’ legacy will long live on in everyone he inspired through his unwavering commitment to his craft.

To celebrate his life and work, friends and fans will be gathering at the Crescent Ballroom on January 5th for a fundraiser. Much like his life, the event will be a celebration of music and art and community.

I had a chance to ask one of the event organizers, Mike Pfister, a few questions about Jules and the upcoming event to be held in his honor…

YabYum: For our readers unfamiliar with Jules and his work, would you mind telling us a little about Jules Demetrius and how you came to know him?

Mike Pfister: Jules Demetrius is a cat that’s truly unforgettable. I came to know Jules when I happened upon his artwork at Songbird Coffee and Teahouse about three years back. They had a variety of his paintings up, but there was one of the Beastie Boys that just instantly resonated with me.

Most of Jules’ work was first designed on his computer, then he hand cut the stencils, and used spray paint on canvas. It’s really hard to explain his overall aesthetic, but if I had to, I’d say it has a visual dynamism, and sense of play that jumps out at you.

At the time I was fairly connected to the downtown Phoenix music scene, but I didn’t know that many artists. So, beside the painting was his name and number. I really loved his aesthetic, so I figured I’d give him a call and see if he could do a commissioned piece of Tony Williams (famous jazz drummer) for me.

Long story short, I called Jules and he ended up inviting me over to his place. At that point he was battling cancer, but was still strong and energetic. We ended up having a three hour conversation about everything: art, his methods, his kids, music. It was like we were friends for years, he had that way about him. I left the house, and when I got home, I remembered what Jules said about knowing he was going to die and that he was worried about his daughters being taken care of after he passed. So I decided it might be cool to do a fundraiser for him. I got back to Jules and told him what I wanted to do and he was incredibly gracious.

I reached out to a variety of bands, poets, and another artist I knew, Adam Dumper. Adam explained he had previously organized a benefit for Jules and would be happy to donate and be part of mine. Alas, due to logistics and schedules, it ended up being delayed. I finally got things going in late November 2016 and, within the week, I found out Jules was in a coma. Then, sadly, he passed.

It was at that point I was determined to fulfill the promise I made to Jules and do something big. Jules was a cat that had a big heart, was incredibly funny, and a singular artist. He connected with so many people in Phoenix and was relatively active in the music scene as well. 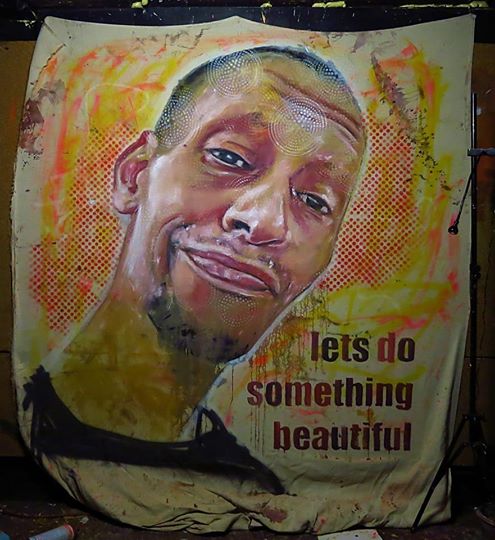 So, you’re are planning a benefit for Jules on Jan. 5th. Can you share a little about what folks can expect at that event? Who will be performing? Will there be artwork on display? Live painters?

I’ve planned a benefit and tribute to Jules on January 5th at Crescent Ballroom. After Jules passed the first two people I reached out to were Leah Marche (Black Poet Ventures/Radio Phoenix) and David Moroney (Crescent Ballroom and Phoenix Afrobeat Orchestra). Leah and I had worked together on a Prince Tribute at Crescent- incidentally Jules donated one of his last Prince prints to the event for a raffle to raise money for a local music program- and David was immediately open to the idea.

We plan on having some major Phoenix bands: The Stakes, Dr. Delicious, Discombobulator, and a few other surprises that I can’t confirm yet. We’re also planning on having live painting. Abe Zucca is donating a piece he did of Jules. Matt Brown and Andrea Bunnell have also reached out to us. There will also be DJ Sets (DJ FACT135, DJ PNYCE) and a silent auction. We want to raise some money for Jules daughters and we’re also working to find a local arts organization that works with kids that some of the proceeds will go to.

Most importantly we want it to be a night for the Phoenix community to come together, celebrate Jules’ life, his art, and heal.

Who is helping organize the event?

As I mentioned, David Moroney from PAO and the booking agent for Stateside Presents was immediately on board, and has been active in working to coordinate the event at Crescent Ballroom. Leah Marche is also helping with securing hosts, artwork, and logistics. Leah and I have worked on a number of large scale projects together and she always helps to keep the things on track.

To be honest I couldn’t have done this event without her partnership. We really want to make this a night where Jules friends, family, the artistic community, and those that want to learn more about Jules can come together and celebrate his life while doing something positive for his daughters and the community.

For more info, including how to get tickets, head to the Crescent Ballroom event page. 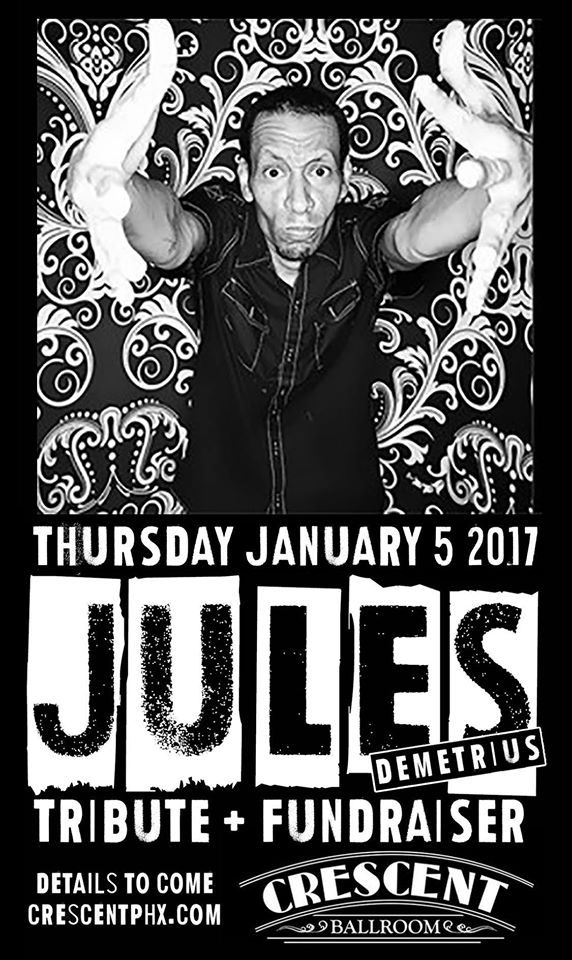