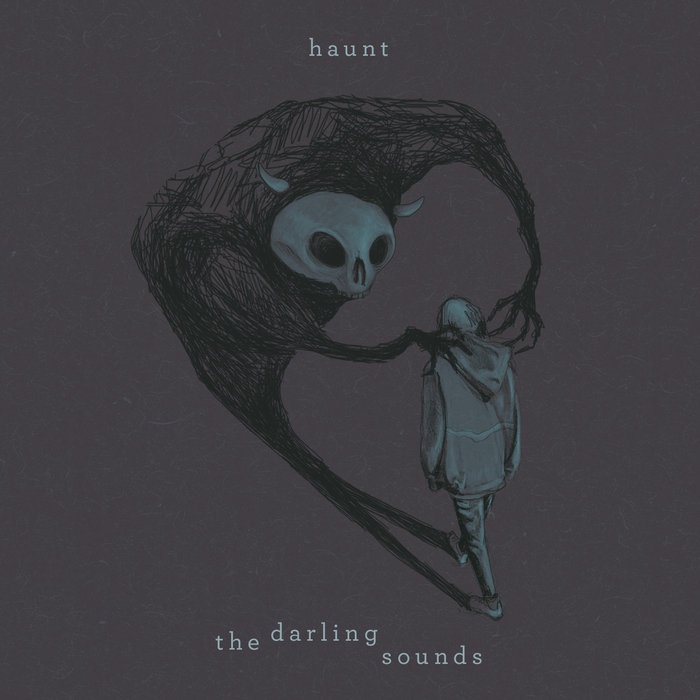 I honestly had no idea what to expect with the release of local spook-pop band The Darling Sounds’ new album. Sure, we featured their video for “Chemistry”, but that was 2 years ago and I hadn’t heard anything from them in the meantime.

Now, I don’t normally go out of my way to seek the type of twee-indie-alt-rock the Darling Sounds produce, but I decided to spend sometime with their latest album, Haunt.

On that first listen, I felt the overall sound certainly isn’t bad and, these days, that’s saying something. Because we hear a lot of crap. On the daily. And the Darling Sounds are not that. They seem fun and innocent, perhaps there’s a little naïveté, and their music reflects that.

But on that second, more astute, listen, I really began to understand the strengths at play within The Darling Sounds.

Grace, Zach, and Cutter (see, how cute is that?) create the Darling ‘sounds’ with each member playing a variety of instruments including: keyboard doodles, cheese doodles (omg, they’re killing me), percussion, and depression (seriously stop you guys I’m dead). The instrumentation is solid and lively, setting the happy-go-lucky sound of the album. The lyrics tell a different, darker story, however.

“Whatever Happens, Happens” opens the album with an old-timey radio melodrama that continues throughout Haunt. This is interrupted with an indiepoprock guitar lick that kicks the song into full, alternative gear. The lyrics bring forth the first of many references to the supernatural whilst expressing feelings of personal pain and loss: “Pull a sheet over my head/suddenly an empty bed/can shake my faith/but rapture is a wraith and you’re not dead yet.” See, spooky stuff.

Of course, local rock critic Mitchell Hillman is correct in calling “2 Haunt 4 U” the “quintessence of the Darling Sounds in just over three minutes.” Not only is the music poppy and the lyrics brooding, the double-entendre on haunted houses and the echoing mice within reveal a graver layer – asking the questions “Who’s haunting who?” and “Do you really want to be here at all?”

Switching things up, “Slow Roots” lives up to it’s name, decreasing the tempo and cranking up the sweetness: “I watched you through a hole in the carpet/but telescopes can’t harvest a garden/I’ve got slow roots growin’ in your stardust.”

My favorite musical moment on the entire album appears on “Slightly Unsightly”. Maybe it’s because the song reminds me of such greats as Belle & Sebastian, but the refrain of “I like when people tell me secrets/it makes me feel important/but no one tells me secrets anymore” not only lyrically impresses me, the guitar only breakdown with tom-tom punches just works so well.

“Domestic Sounds” is an older Darling Sounds track and was the first single for Haunt. Showcasing more of the surf-rock sound of the band it features a fun guitar solo and the stellar chorus, “Can I listen to the sound of clinking cutlery?/’cause it’s the sound, it’s the sound of domesticity/I’m on the outside looking in at all this normalcy/and darlin’, I don’t know where to go.”

Closing the album is the vocal harmony, acoustic guitar, shaker, and tambourine only track “Laughing In Her Sleep.” This melancholy yet optimistic track is the perfect ending for the record, “She could sweep the cobwebs with her eyelashes/some nights I even dream of this/I wonder if she dreams about this too/As she’s laughing in her sleep you’re laughing in your sleep/and I’m home with you.”

It surprised me that the album is darker than it seems. I listen to albums several times over before I review them, but only when I sat down and was actually able to read the lyrics of the songs on Haunt did I catch the true nature of this record which explores the horror and fascination one feels when confronted with a mortal end.

Christina Cole’s cover art is apt: your own inner demons manifesting into a powerful force that permeates and controls your life.

Released on 11/11 of this year at Valley Bar I definitely recommend checking out Haunt by the Darling Sounds. It’s impressiveness was slow to impress upon myself but that’s probably just me!

For more info on the Darling Sounds check out their Facebook and Tumblr pages.