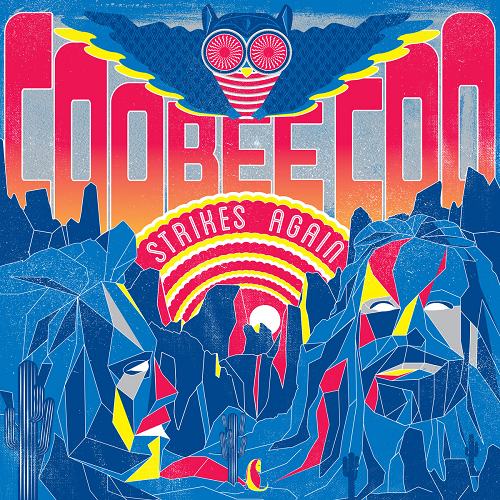 CooBee Coo is back with their new EP Strikes Again and I swear these guys just keep getting better and better.

The way I feel about CooBee Coo is essentially how I feel about the sketch comedy show Key & Peele: it’s one long, absolutely outstanding demo reel. In this case, the duo of K.C. Barras and Jesse Morrison produce incredible jams of the highest caliber – not only achieving the goal of writing a damn good song, but engineering it to sound pro.

And that’s because their Studio at the Farm in Gilbert, AZ is pro. Not only have they worked with some stellar Valley bands, recording and engineering audio and video, they also produce all their own music at the Farm, including their latest, Strikes Again.

“In the Zone” kicks the album, and the funk, off hard: “Don’t do me wrong when I’m coming strong/’cause you gotta know that I’m in the Zone alright.” The harmony-fueled backup vocals add just that extra touch of splendor throughout the entire track.

Approaching the realms of straight EDM, “Make a Vibration” starts with the just bass and synth, but when the acoustic guitar drops its precise strumming for the second verse the song becomes truly powerful. “We’ve been stomping our feet, yeah/we won’t ever say ‘Yes’ to a ‘No’/Breathe in, taste the free air/and don’t you ever let it go.”

“Never Settle” reverts back to the funk heard earlier. Although the entire song is spectacular, its ultra-smooth bridge with the words, “Don’t you believe them/When they say you want something you can’t reach/There’s a pot of gold/Waiting for you if you just believe” is my favorite musical moment of the EP, especially when the final chorus explodes. It’s as much personal mantra as it is advice for others.

With its synth-infused, electro-pop, funk-hop, the boys of CooBee Coo might just be right. Make sure you give Strikes Again a listen below and head out to the Rebel Lounge on Dec. 29th. The band doesn’t play out often enough so every opportunity to catch them live is an opportunity that shouldn’t be missed!

Check out CooBee Coo at The Rebel Lounge on Dec. 29 with The Deadbeat Cousins and Dirty Sunset!