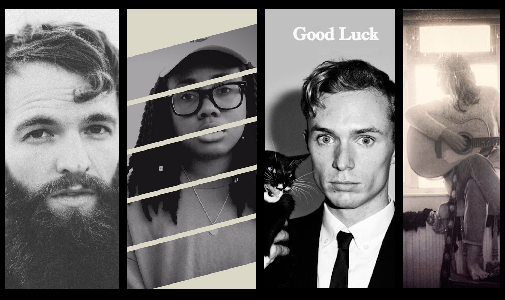 Australian artist Lucas Laufen pairs a stripped down sound with an emotive lyricism; both of which can be heard on his new single, “Boulders”. Laufen spent much of this past year out on tour, but he returned to his home nation to perform and gather inspiration for his forthcoming release, due out next year, before heading to Berlin where the artist will be living for the foreseeable future while working on his second EP. “Boulders” is peaceful and pensive – my favorite combo. Give the single a listen below and then head here for the complete EP.

Nashville-based artist Nicole Boggs has a smoldering voice and a soulful sound on her new single – the aptly titled, “Something New”. After releasing her debut album three years ago, Boggs decided to take her sound in a new direction. This single is the transitory process between what was and what she will become. And, I must say, I’m intrigued. Fusing blues and soul, “Something New” provides a stellar introduction to the sultry vocal stylings of Nicole Boggs. Give the single a spin below or head here to get your own digi-download of the new EP, also titled Something New.

The mellow folk music of L.A.’s Cody Crump heard on “Seventeen” envelopes the listener in sweet and somber sounds. This single comes to us from Crump’s ambitious 2016 album, Good Luck, which clocks in at 19-tracks. Pairing a straightforward lyricism with an orchestral layering of vocals and guitars, Crump crafts an uplifting musicality on “Seventeen” that carries through to his other songs. You can check out the complete LP right here, but first give “Seventeen” a listen below…

This dreamy number by Amy Gillespie immediately reminded me of Joni Mitchell. Only then did I realize that the “For Blue” part of the title of this track was actually a dedication to Mitchell’s quintessential album, Blue. Gillespie shares many qualities with Mitchell including a penchant for introspective lyrics and gentle shifting soundscapes. Give “Wintertime (For Blue)” a listen below or score your own copy of the single here.

Staten Island’s Justy has a unique, smokey-sweet voice reminiscent of Macy Gray. On her latest single, “Can’t Explain”, Justy meanders through the enchantment of love against a mellow, jazz-tinged musicality. The single incorporates HipHop elements for a completely modern take on the love song. At only 21-years-old, Justy is quickly establishing herself as an artist to watch. Give “Can’t Explain It” a listen below…

The music of Bethany Becker might come along with the tag “country” but you shouldn’t go in expecting Loretta Lynn. Instead, think early Taylor Swift: pop-tinged country. “I Want Love” offers an innocent, earthy, upbeat anthem for those transitioning into adolescence. Hailing from Austin, the 18-year-old Becker proves she’s got promise on “I Want Love” which was written with a little assistance from Grammy-nominated songwriter and producer, Jeff Pardo. This single is the title track from her 2016 debut LP (available here). Check out “I Want Love” by Bethany Becker below…

Madi Earl might not be old enough to vote, but she’s already garnishing attention for her songwriting skills. “Walls” has an electropop vibe and smooth vocal style. Earl’s not just a singer-songwriter, but also a pianist and violinist. Madi Earl plans to release her debut EP next year so this is definitely a young artist to keep an ear turned toward. Give “Walls” a listen below or head here for your very own copy. If you dig “Walls”, I also suggest looking into other her previous singles (also available through iTunes and Soundcloud).