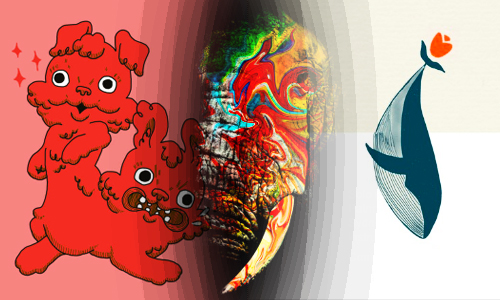 The Blurst is the undertaking of Sydney-based multi-instrumentalist Liam O’Shea. His latest single, “Dogdog”, comes to us from The Blurst’s November, 3-track release of the same title. O’Shea fuses lithesome vocals reminiscent of Elliott Smith with a gritty, back alley, noise pop. Check out “Dogdog” by The Blurst below and then head over to Bandcamp for your free digi-download of the three-track release from whence it came.

The Psychedelephants add a grungy, psychedelic edge to their own brand of indie rock.  “Lunar Treatment” brings together trippy organs, richly textured vocals, and crisp guitar work for a powerful number. Hopefully, this new single means The Psychedelephants might be hashing out a new album. Hopefully? Maybe? It’s been a more than a minute since the band released their 2014 (and much loved by YabYum staffers) LP, Asymmetrical Geometry. Give “Lunar Treatment” a listen below…

Smoky vocals meet magical storytelling on “Golden Mountain”, the new single from Emily Afton. The soundscape shifts suddenly from gently meandering to forceful and driving. It’s the completely fluid juxtaposition of gritty garage energy and the jazz-tinged indie that really sold me on this single. “Golden Mountain” is as compelling in its aural variance as it is lyrically. This single comes to us from Afton’s 2016 LP, Archetype. Listen to “Golden Mountain” by Emily Afton below and then head here for the complete LP.

If you’re a regular reader here, there’s a chance you’re already familiar with the musical stylings of Mateo Katsu. As part of his Fourteen Weeks project (and album), Katsu recorded a song a week for (you guessed it) 14 weeks. “Diplomatic Boner” is another stellar single from that undertaking. The indie rock Katsu creates has a relaxed summertime vibe – like friends jamming in a garage – but the lyrics are often pensive. “Diplomatic Boner” is no exception. The lyrics on the track suggest wry amusement as the world stumbles into chaos. Even as the texture shifts, the tone remains strident: amused, if slightly despondent. Listen for yourself below or head here for the complete album.

This new single from Monte Del Monte kicks off with a mellow lounge sound, but it quickly gains energy until you find yourself dancing at a seaside bar in the middle of the Pacific with one of those little umbrella’d drinks in your hand. Okay, maybe this magical transportation is more metaphysical than, you know, physical-physical. Whatever the case, Monte Del Monte lifts spirits and sways hips with “LA Mental” so make sure you give it a spin below…

Bridesmen is the new project from Kenton Chen, a singer-songwriter from Los Angeles. Combining indie, electropop, and soul for a chill sound that will have you reaching for the repeat button, “You and Me” delves the complicated web of communication that exists within relationships. Produced by Eric Cannata (of Young the Giant), “You and Me” by Bridesmen really stood out amongst the insane number of indie/electro tracks that flood in everyday for its supple vocals and precise production. Give the single a spin below or head here for that digital download.

This indie-pop single from Portland producer/songwriter/musician Rob Daiker has the romantic charm of candlelight and scented bubble bath. I have to say, there’s just something about a piano-driven love song that really hits home this time of year. “All for a Kiss” is just that: sweet, if more than a little sentimental, but executed with serious musicianship. The single comes to us from Daiker’s 2016 LP, Binary Affairs, which can be procured for your personal collection here. First, give “All for a Kiss” a listen below…