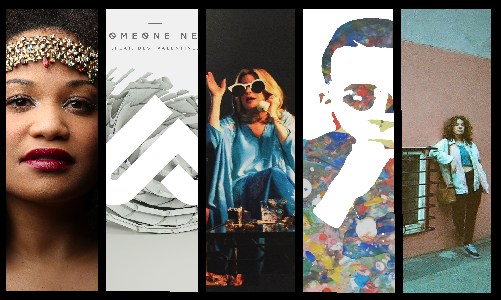 The soulful, sultry vocal stylings of Tameca Jones will awaken the disco queen that lives inside every one of us. The Austin-based songbird released “Hot and Bothered” from her debut EP, Naked, which came out earlier this year. Jones’s voice smolders then soars while the stellar musicianship will have you busting out your best John Travolta moves whether in your kitchen or at a club. Give “Hot and Bothered” a listen below and then head here for our very copy of Naked by Tameca Jones.

Unlike Pluto is the musical moniker of Armond Arabshahi, an Atlanta-raised/L.A.-based producer. This new single from Unlike Pluto starts off with a slinky, somewhat sludgy beat, but jazzier permutations kick in and it all comes together into one slick sound. “Someone New” features the vocal styles of Desi Valentine and some sick samples from 1950s jazz records. The single was released as part of a Monstercat compilation (available here). For more tracks from Unlike Pluto, head here.

Philadelphia’s Emma Cole packs a serious Motown punch on her new single, “He Will”. The retro-style backing vocals in no way diminish the soaring power of Cole’s own pipes and the vintage soul feel of the music will have you dancing before the first refrain kicks off. Fans of Old School R&B need look no further than Emma Cole. Take “He Will” for a spin below…

Jean-Paul Viteri (or JPV, as he’s known to his friends) dropped this new single in hopes of seducing you in two languages. And it just might work. “S.O.S.” (produced by RDY Beats) offers listeners a contemporary R&B number, velvety and emotive, that speaks to the power of love in both English and Spanish and, of course, the universal language of music. Give “S.O.S.” by JPV a listen below and then get your own digi-download of the single for your personal nighttime collection here.

Brooklyn’s Meghan Gibbs has a breezy voice and a vintage charm, both of which you can hear on her single, “How Do You Know?” Stylistically, Gibbs goes for a throwback sound that harkens back to the early days of R&B. “How Do You Know?” is a dreamy number I can imagine listening to on a Zyon Wooden Retro Turntable back in the day when 45s were still a regular thing. Chill out with the mellow single “How Do You Know?” by Meghan Gibbs below, then score your own copy here.

The emotive power of Morgan St. Jean immediately captured my attention when “Out of Love” first crossed my path. By the end of that first listen, I was one shot of tequila away from total emotional collapse. The L.A.-based songstress takes sentiment and elevates it to desperate heights with the authenticity of her performance. Let “Out of Love” by Morgan St. Jean break your heart. Listen below and then add the track to your breakup playlist (available for purchase here).

Ever feel let down when you get drawn into a relationship with someone who isn’t ready for a relationship? Then this song is for you. Queen Novah lays out her romantic disappointments with a smooth and sultry voice. My only complaint is the strange squeaky noise that is incorporated to the beat. It sorta sounds like the illicit confessions of a bedframe, but I’ll forgive the squeak because of the mellow vibe and stellar vocals. This is a promising start for Queen Novah. Give “Lies” a listen below…