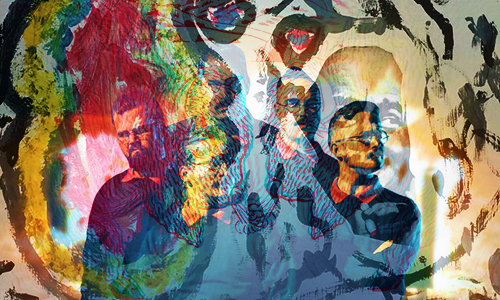 The four-piece formerly known as Sweat Lodge released this stellar LP through Related Records back in November. Now performing under the moniker Turqouiz Noiz, this West Coast act has a gritty garage punk sound that immediately had my full attention from the start of “Green Hair”, the opening track from Sweat Lodge. Turqouiz Noiz adds some heavy distortion to give their tracks an experimental edge. There’s a lot of variance within the overarching Turqouiz Noiz sound which keeps the album interesting from start to finish without allowing the energy level to dip for even a moment (the exception perhaps being the intro to “Braid”). Sweat Lodge by Turqouiz Noiz was released on vinyl and cassette, both limited edition and selling out fast, so get a hold of your own personal copy ASAP before they’re all gone. You can do that here, but first feel free to preview the album below…

Okay, we’ve had some time to get past the gimmick, right? Okilly Dokilly is the first Nedal band (Ned Flanders-themed Metal) in the world which has earned them a lot of slag for capitalizing on an idea rather than their music, but is that where this review ends? No, because they’re not just a funny idea. On their debut LP, Howdilly Doodilly, the band puts forward some serious musicianship mixed with the sopping irony that first threw Okilly Dokilly into the public eye. Just listen to the guitar work on “Flanderdoodles” and tell me they aren’t anything more than clever. If you’re one of those message kids, always seeking out the deeper meaning by pouring over every lyric on an album, then maybe this release isn’t for you. The lyrics to each track might be best described as terse; gleaned, as they were, from episodes of The Simpsons for humorous effect.  Screeching vocals and high energy antics pepper every track from “White Wine Spritzer” all the way to “Godspeed Little Doodle” and beyond. If you’re down with metal, then I suggest you check out the Nedal of Okilly Dokilly. The band will be touring this coming Spring so check show dates to see when they’ll be hitting your neck of the woods.

This teenage punk act outta Phoenix dropped their debut LP last September. Zero Degrees North might be a little green, but you won’t hear that in their sound. This three-piece packs all the punk rock punch you need to up the energy on an otherwise bleh day. Mandatory Story Time kicks off with “Circus Freaks” which sets a feisty pace for the entire album. The second track, “Apocryphal”, has more of a pop-punk feel than the unabated rowdiness you’ll find on other tracks while “Caught”might actually be about stealing chocolate milk (and getting nabbed for it). But don’t worry. All their themes aren’t all high school drama. Zero Degrees North tackles some serious topics as well and even offers some key pieces of advice, like “don’t be a douche.” Mandatory Story Time is a promising start for these youngsters. And I bet they put on one hell of a live show. Luckily our next chance to catch them is coming right up – January 15 at the Rebel Lounge. Check the debut from Zero Degrees North below and then head to Bandcamp to throw some support their way.