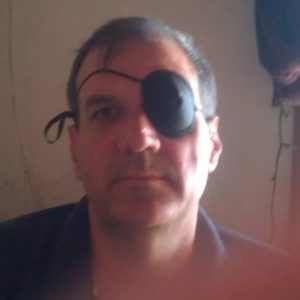 Tucson musician John Polle of Whispering Wires and Discos took some time out of his schedule to participate in our Tastemaker’s Ten. As per usual, we asked him to select ten tracks that he feels everyone should hear. What came back was an eclectic mix of singles from Arizona and beyond; unconfined by time period or location. Enjoy.

I closed my eyes and picked this track at random, because they’re all good. These soul-punk weirdos give you everything you need: sex, druggy hidden headphone treasures, sonic landscapes, and hooks. It’s rumored head Lengua Isaac Reyes can write hits and play Grand Theft Auto simultaneously. ¿Quíen es mejor? ¡Nadie!

*I have, on occasion, played with Lenguas Largas, but purely in a support role. I am first and foremost a fan.

Tommy Johnson
“I Want Someone to Love Me”

This guy sold his soul to the devil before Robert Johnson, drank Sterno when he couldn’t buy booze, and wrote this masterpiece.

Early 80s noisemakers from the art-you-can-dance-to school of rock. Free your mind and your middle finger will follow.

There is a spring in Nogales, AZ that bestows those who drink from it rock n’ roll superpowers (see also Isaac Reyes). Great riffs, smart lyrics, timeless sounds.

There’s a reason this song was released as a single, if you were to put it next to any other track on a record, said track would be reduced to ashes. Put on your headphones, turn it up, and experience the majesty. If I could cry, the guitar solo in this song would bring me to tears.

One of these dudes worked at the local record store in my dinky hometown. He once refused to let me purchase a record he thought sucked, he was right to do so. The Liquor Boys played only one show, in a former post office, with Sacramento band Tales of Terror. Their cassette, released in 1984, was recorded in the 4-track home studio of some Christian dude who wouldn’t let them drink or smoke weed in his house. Smoke some weed in your house while listening to this.

Have you ever wondered what would happen if you combined Big Black and The Archies? Yeah, me neither… Well, it turns out you get a sticky, sweet, and vicious explosion. Check out any of their delightful recordings or see them live and get ready to join the cult. Bring a towel.

Most things that need to be said have been said.

They developed their unique yodeling style by trying to mimic birds on their family farm in Minnesota. The end result is otherworldly. As psychedelic as anything a mountain of amps and wah-wah pedals could ever produce.

I don’t really know what it’s about, but I like the imagery. And considering what a heartless jerk he is, Neil sure can tug at the ole heartstrings.