We get a lot of electropop sent to us here at YabYum. A LOT. I listen to hundreds of singles every single week, and let me tell you, the reason most of the submissions get turned down is because it sounds too much like everything else we’ve heard that week. Your retro synths and hook-filled love chants are not original. In fact, usually by Thursday, they sorta make me want to kill myself.

This is not that. This is the antithesis of that. This is everything art should be: raw, exposed, fresh, and maybe a little weird. I am, of course, speaking of W H I T E – L A B E L, the October 2016 release from Phoenix’s Doyenne.

W H I T E – L A B E L is a 12-track collection that delves into the psyche of the artist and, in turn, the listener. It is an avant-garde undertaking that blurs fantasy and reality with the same fluidity that the Doyenne approaches gender. And avant-garde is often weird. It should be. It should sound strange to you, at first, because it is new and different. And then it begins to take root in the listener. That’s exactly what this album does.

The new release from The Doyenne opens with “SEX | PARTY” and listeners should immediately recognize this album is NSFW. Twerking, weed, and pornographic fantasies are all on the table here. You’re not  going to want to spin this on company time. Actually, you’re going to want to wait until you have space to move around anyway because the Doyenne will get you dancing.

Combining electropop elements with hiphop, the Doyenne shapes out a unique brand of bedroom pop and, in doing so, gives new meaning to the term. There is an authentic presence of self because, as a songwriter, he doesn’t hold back.

I discovered a lot of variance between tracks. For example, “S O U N D ♪♫ C H E C K” has a vibrant, carnival feel before The Doyenne declares war in “Slay the Queen”. And “Lævateinn” gets appropriately disjunctive with a slightly industrial edge as the aggression rises while “V I B R A T O R” creates a trance-like atmosphere. Doyenne classics like “Party Girl” and “Ass Like Beyoncé” also make an appearance on W H I T E – L A B E L. 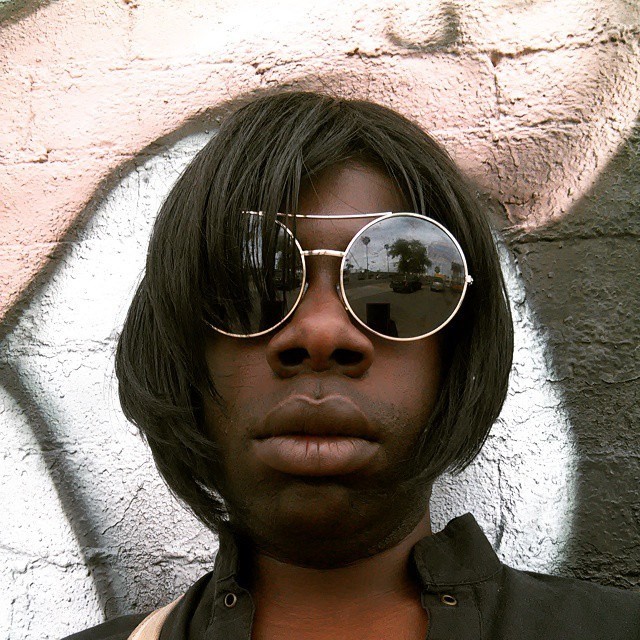 Photo courtesy of The Doyenne

The Doyenne throws down some serious vocals on “strange kind of love.”, the closing track. I’m definitely excited to hear more from the artist on the vocal front in releases yet to come. This album isn’t really a dance-club mix (it’s more art house than that), but it will definitely turn your living room into a dance party for you and your friends. And I bet it gets the Trunk Space popping.

Artists have long been the harbingers of shifts in human consciousness. They break down the illusory bonds of convention simply by being true to their own nature. The Doyenne is going to keep shimmying over those unneeded divisions in the sands of society until they are forever obscured and he’ll do it to a dance beat. Fuck yeah.

So, if you’re harboring outdated modes of thinking, then it’s time to “Get comfortable with being uncomfortable,” (to quote Jillian Michaels with only a moderate amount of shame). The world is changing and it’s not going to wait for you to adapt. If you listen closely to W H I T E – L A B E L, you can hear the future of music plotting its path into the world.

I had the opportunity to ask the Doyenne a few questions about the W H I T E – L A B E L, DIY music-making, and living “beyond gender”.

YabYum: Okay, let’s start with the nitty gritty. Can you tell me a little about your music set-up? What are you using to make these tracks?

The Doyenne: I use two different Digital Audio Workstations; Fruity Loops (FL Studio) which is my main program and the one I’ve used since 2006. I also use Logic Pro X when the Mac set up is available (the song “strange kind of love” was produced entirely on Logic Pro, for example). Vocals were recorded either using a Samsung CO1U or an Audio Technica ATR2500, both of which are USB microphones. I usually use a keyboard for synth parts and all other mixing or production is done with the DAW. My laptop is dated and has been in use since 2009, but most of my work from the last few years has been produced on it. It’s the same laptop I use to pipe music into sound systems for live performances, though I’ve also used a tablet for that.

Are you DIY with your recordings? They have a clean, well-produced sound.

Thank you! I produce, compose, arrange and record all of my tracks. Before I was solo, I was one half of a production project where I recorded vocals and sent them to an instrumentalist who, at the time, lived in Bulgaria. This was before 2008. Since then, everything has been put together by myself.

W H I T E – L A B E L gets downright gritty when it comes to divulging the details. It seems like, as an artist, you don’t hold back when it comes to putting your authentic self out there. Would you say that’s accurate or does The Doyenne still hold back a little something-something of the self from your songwriting?

You address the topic of gender throughout this release, at one point identifying yourself as “beyond gender”. Can you expound a little on what it means to you to be beyond gender?

That’s a line from “S E X | P A R T Y”. I feel like I’m both man and woman, or rather I don’t feel like I can’t do things because I’m a man. As I get older, I feel more comfortable with every part of myself that would be considered feminine or masculine, and it’s in that acceptance that the all parts of me act synergistically as greater than the sum of the individual qualities. That’s what I mean when I say that I’m beyond gender; I’m saying that I’m beyond the limitations that society places on people based on that construct.

It is one of my great ambitions to catch a live performance from you. I hear it’s quite the worthy experience. I’m just curious how you feel your music translates to the live setting? Would you say that’s your strength or do you prefer the solitude of the creation process?

I rarely get to watch myself perform on video playback but I know that performance has always been the end goal when it comes to making music. I’ve never had a real ambition for spending time recording and writing music, especially when everything is done by me. It’s always about finding the best way to sing, rap, or dance to get the idea of a song across. I actually mostly record for my sake; I listen to the songs over and over to learn them and plan out how I’d perform them in my head.

Now, if I’m not mistaken, you’re in school at present. Are your studies music-related? And, if so, do you feel like your formal education has helped you cultivate your skills as an artist?

Yes, I’m in school right now for an associate’s degree in music business and I’m hoping to graduate in Spring of 2017. I’ve learned some skills to be a better musician but the entire reason that I wanted to go to school was to learn how to market myself and eventually realize my real goal – to tour. Returning to school has definitely helped me put a lot of things into perspective, though I understand that route doesn’t necessarily work for everyone. I’m still deciding on whether or not I want to continue as a recording artist full time or if I’d like to go further into another field like music law.

I’m planning on spending a lot more time with W H I T E – L A B E L, but I’m interested to know what you’re working on now. What’s next for you, musically speaking or otherwise?

My immediate goal is to get back to performing. I intentionally haven’t been booked for a show in almost a year so that I could focus on being mentally healthy and focused on school studies. Designing a better show and being able to better communicate with the audience are the most important things to me. This year alone, I’ve uploaded and released five separate music projects. I want to see if they have the same ability to move a crowd as some of my older songs like “Party Girl” and “Ass Like Beyonce’”.

As far as releases go, I have some ideas and I would ideally like to release something before the first half of 2017 is over. I had an idea for an album called American Faggot that would be more intentionally organic and folk-inspired as well as an album talking about my recent time in police custody. I also want to do more singing. Haha. I never wanted to rap exclusively and now I feel that it’s okay to work hard and find my voice.