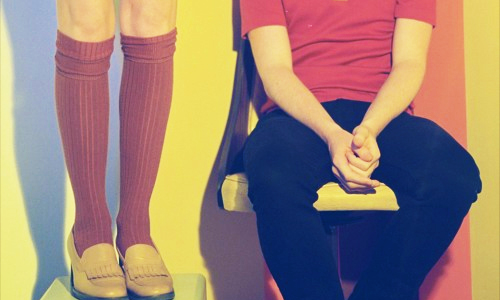 Lost Kings hit upon a touchy spot in my relationship with their new single, “Phone Down”. Now I don’t mean to be a cell phone addict, but if I’m being totally honest, I am. And with the release of “Phone Down” my boyfriend now has a new anthem to play for me when his aggression for my electronic counterparts reaches a pinnacle. I’d be pissed except the song is really, really good. So good, in fact, that I’ve probably listened to it a hundred times already. The sultry and brash vocals of Emily Warren pairs perfectly with the Lost Kings’ tropically-tinged production.  I can’t get enough of “Phone Down” so be warned that this single is very addictive before you hit play. But you should definitely hit play.

Marco and Diego make up the musical duo from Cambridge, MA known as Congratulatinos. Their track, “Stalled”, comes to us from the band’s August release, Don’t Fade. Once you hit play, this single will bubble up from your speakers and fills you with an energy that will enliven and soothe simultaneously. “Stalled” has all the romance and hope of new love, set to a groove more playful than sappy. Listen to the single from Congratulatinos here and if you like what you’re hearing (and you will), then check out their LP, Don’t Fade, available here or through Bandcamp.

Louis The Child teams up with Icona Pop for another hit in the works. “Weekend” packs a powerful pop punch, especially considering the stripped-down production side. Sometimes, folks, less really is more. This track is for the folks who “treat weekdays like the weekend” – you know who you are. Check out the official music video for “Weekend” here or give the single a spin below.

Dallas-based act Hello Shannon has a new album slated for release in the Spring of 2017, but fans can enjoy this early sneak peek of what’s in store for them next year with the band’s latest single, “Pressure”. This vibrant, jazzy, indiepop track walks the borderlands of electropop, but rather than using synthed-out layers to create a lively atmosphere, Hello Shannon relies on hand claps and a cappella flourishes in “Pressure”. Give the single a spin below and join us in the wait for the full album from Hello Shannon.

“When You Make Up Your Mind”

All you fans of vintage pop need look no further. Fascinations Grand Chorus is for you. Combing the talents of “rival songwriters” Stephanie Cupo and Andrew Pierce, Fascinations have a retro style that will charm contemporary listeners. “When You Make Up Your Mind” comes to us from the duo’s latest EP. Take a listen to the single below and check out the complete EP (available here).

This mellow single from Tucson musician Jake Walters comes to us from the softer side of the electropop spectrum, but don’t let that establish your understanding of Walters’ musical offerings. “Happy Song” – the opening track from his 2016 release, Broken Brain, which came out over the summer – is a gentle, almost dreamy introduction to the eclectic, if not slightly erratic, collection of songs found on the album. Walters moves from industrial tinged electronica to catchy pop numbers to psychedelia. This collection is definitely an exploration of electropop in all its forms. Give “Happy Song” a spin below…

Phoenix has their own band called The Ready Set, but this producer based out of L.A. has a totally different sound. Featuring the vocal stylings of Karra, “Before You” offers up radio-ready electropop with a kickback vibe and uplifting vocals. This track is a follow-up to The Ready Set’s collaboration with Michael Brun, “Good Enough”, which brought in more than 4 million spins through Spotify. Definitely check out that single too, but first, give “Before You” a listen below…