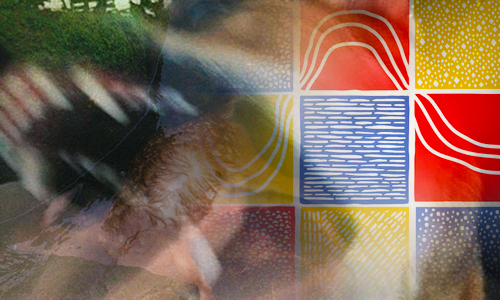 Before you embark on the new Wolvves’ album, the first thing you’re going to want to do is forget everything you think you know about Wolvves. This isn’t the Millennial Party Band of days past.

Paradox Valley represents a shift not only in players, but in vision. The emotional content of the album vacillates from dreamy to outright aggression to wry observations on the world while the sound can only be described as experimental. There is a nod to minimalism throughout the release which lends Paradox Valley a beautiful starkness against the entangled lyrics.

And, if you don’t like Aydin or you think he’s lyrics are too abrasive, fine. You don’t have to get it. That’s fine. He’s a poet continually seeking to explore the uncharted regions of music and art and honesty. I might not have been a big fan of the (old) Wolvves’ previous album, but I can now see the directional impetus. Sparsely textured and stunning, Paradox Valley is an achievement. You can purchase the album here or preview below.

Diners saved me. It was a stressed and overworked Monday when I sat down to give Three a spin.

The strain began to evaporate like tiny bubbles in a glass of citrus soda and my blood pressure began to decline to a “safe range” once again as soon as the brief “Waiting on Music” introduced the album. By the time I sauntered through “Hear the World”, the second track, I was sold.

Three is innocent, but not puerile; beautifully harmonic, but not overworked. The tracks are minimal but lushly textured and invigorating like a cool breeze on a hot summer day. “Fifteen on a Skateboard” is an early favorite of mine (for those who haven’t seen Diners perform that track live on our Songs from the Reading Room series, head here), but I also love the nostalgic “In My Hometown” and the romantically wistful “Laundromat Conern”.

Actually, the whole release is stellar from start to finish. Score your own copy of Three for your personal collection here, but you can preview the album below first if you like.

The summertime release of PRO TEENS’ sophomore effort, Accidentally, coincided perfectly with the sticky, sludgy heat of the Arizona summer.

From the start of “Goodnight Moon’d”, the opening track, the listener is submerged in a sea of insouciance. Lead singer Andy Phipps’ voice emanates indifference that is well matched to the ironic tinge of the overarching musicality. The result is cool; cool in the way seedy lounge bars and drug-addled teenagers are cool.

There is something dark, slightly distasteful, and existentially dangerous that creeps around under the surface, but you find yourself inexplicably drawn into appreciating the degradation. Of course, all this glib disregard that one finds in the instrumentation is offset by the brooding, almost insolent lyricism. Therein, lies this album’s truly authentic self – not one or the other, but both aspects unified. The sardonic and the sullen.

Rather than continuing to speak in broad generalities, I guess I should dig into Accidentally. The previously mentioned opening track was in contention for personal favorite, but retro-surf-infused “Puberty” holds that official title. “Feather Boy” brings out a dreampop with psychedelic streaks while “Hamuela” swims around the listener; comforting as a poolside cocktail, something with an umbrella.

Just because PRO TEENS puts on a glib front, don’t be fooled by the hype. Sink down into this album and you will find its poignant and painful moments laid bare for those who care to look for them. Listen to this album in its entirety. You can do so below or you can snag that digi-download here.