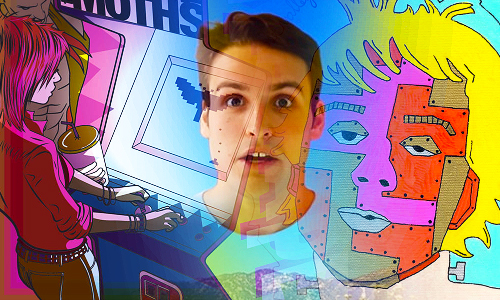 Brooklyn’s lost valley proves you can do a little with a lot. On his self-titled debut, you’ll find 11 stripped-down tracks of some of the best bedroom pop I’ve heard in quite some time. “ctl” kicks off the release with something a little playful despite being mildly depressing before “wasterluv” ups the angst.  There’s a lot of variance on lost valley while maintain a distinctive and unified sound. “fried chx” takes an indie-folk approach while “sandhill dr.” touches upon some drone. “julie” offers ruminating track tinged by love before “in my solitude (duke ellington)” closes out lost valley with an experimental edge. Listen to lost valley here…

Harper and the Moths takes their love of 80s synth pop to a whole new level on Mixtape; a collection of covers from the Phoenix act known for their New Wave flair. Almost forgotten hits are given new life on this EP like Timex Social Club’s “Rumors” or Rockwell’s “Somebody’s Watching Me”. Personally, I’m quite taken with “West End Girls” even though Aha’s “Take On Me” was an integral part of my music-listening development as a child so it also has a special place in my heart. Mixtape was released as a Halloween treat for fans of Harper and the Moths, but I suspect the band might draw in a lot of new listeners with this amalgamation of cover tracks. Listen to Mixtape by Harper and the Moths, and if you like what you’re hearing, delve into the band’s original songs from earlier releases.

NYC-based musician Henry Hall blurs indie rock and pop on his latest EP, My Friends Don’t Like Me. And, much like the title of the release implies, Hall invokes a sly wit that often turns toward self-depreciation in his lyrics. When you pair that lyrical prowess with the effervescent feel of the melodies and Hall’s lively and lithe falsetto, the result is infectious. “Comfort Zone”, the first single and opening track from his EP, introduces the buoyant energy that carries through the rest of the songs. “Company” achieves ethereal harmonic heights while “Wyoming” provides a dreamy vision of open prairies. I love when musicians are able to add humor to their songs without sacrificing, you know, the music. Henry Hill does just that. Give My Friends Don’t Like Me a listen below.