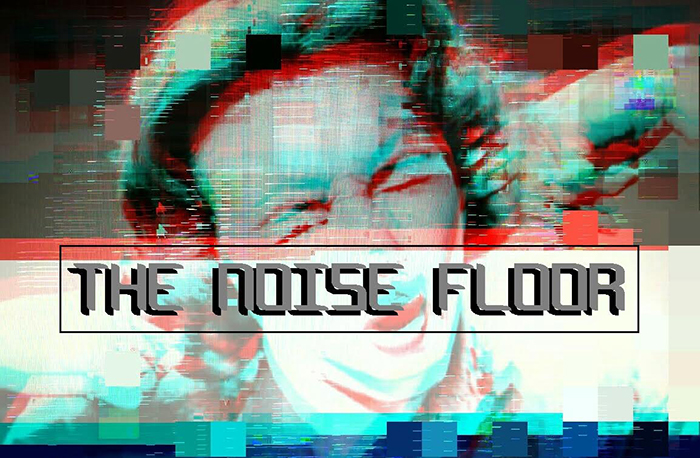 My fellow Phoenicians, today is a great day.

Today is the day that we here at YabYum start turning some of the focus on an area of music that often gets overlooked, disregarded, and sometimes even shunned completely.

We’re talking about noise music. The avant garde. Compositions that are constructed using common or uncommon sources. A niche where one man’s trash could be another man’s musical treasure. A genre that allows creativity to flow while feeling liberation from limitation. Chaos is the only rule. Fun is the only objective. I invite you to join me on The Noise Floor!

For the first installment of The Noise Floor, I had a chance to chat briefly with local cat Scott Mitting about his current project Militia Joan Hart, modular synthesis, and the noise scene here in Phoenix…

Chris Nunley for YabYum: To start, let’s talk about the current project that you’re involved in – Militia Joan Hart. How did the band form and how would you describe the band’s sound?

Scott Mitting: I actually had the pleasure of watching it happen in front of me. I was at the folk punk fest at like 8 AM on a Sunday at the Trunk Space and I saw Andy Warpigs was super excited about this vintage delay pedal and there was this other guy running Ableton with the coolest dreds just kicking out this chillwave music (turned out to be Brandyn from WOLFZiE who is now one of my best friends). Andy sang very much like Thom Yorke. May have been only 10 people in the room but I was blown away.

You actually saw the moment I joined the band when I met you. I had been to all but one of the shows and Andy invited me to try out my modular synth so I did. I thought Brandyn was gonna have a panic attack. 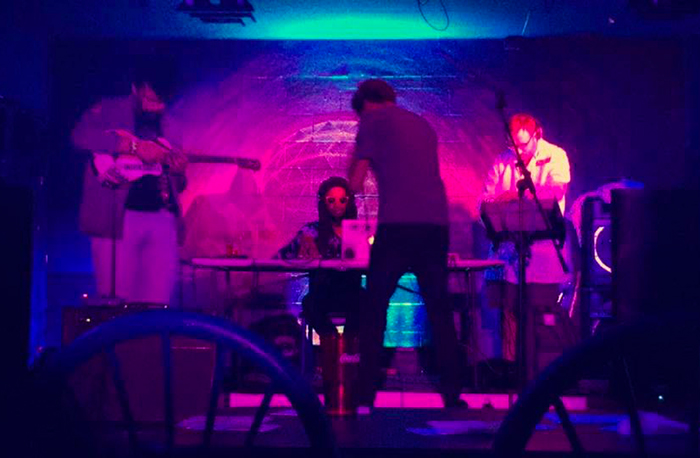 I didn’t realize that was your debut with the band! That’s awesome! So to those who don’t know, what exactly is “modular synthesis”?

SM: I think a good analogy for modular synthesis is the guy that brings his guitar pedal board with 15 pedals. They all do a little something different and, if you plug in the wires between them differently, you have an entirely new setup. Modular is just like that, except organized onto a rack, and some of those modules are tone generators instead of just effects. You can dial the pitch of your choice and a sine wave or square waves comes out.

I had watched the film “I Dream of Wires” and almost every artist interviewed had admitted that modular synths is an addictive hobby. Would you say that’s true?

SM: Oh I absolutely love that film. I think it was Mike Goosens who turned me onto that movie. That’s a great watch if you want an intro to modular synthesis and the history and all that. Actually, my acoustic guitar has a sticker that says “Don Buchla for President”. But on the question, I mean all hobbies are addictive or you’d stop doing them. The issue with modular is how expensive it gets even on the used market. I was already hooked on Reaktor for 15 years but when Native Instruments made Reaktor 6 send Eurorack compatible control voltages, I knew I had to make the jump. That first jump was about $1000 and I was able to buy it from a local company (Blue Lantern) with enough modules to get started. 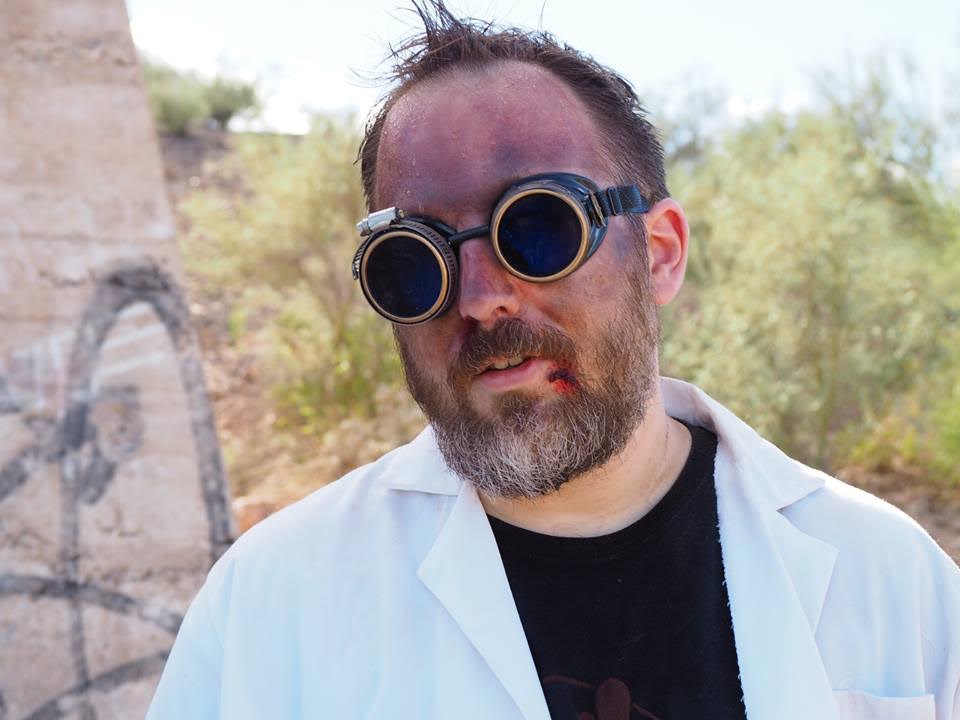 What is it about modular synths that appeals to you and how do you go about applying those sounds to MJH?

SM: It’s really more the hands on ability to change everything in real time using physical wires and physical knobs. I mean, I can do this with a laptop and midi controllers (as I do in every other act I’m in) but no computer is easier to debug. I’m definitely not an analog purist and my favorite module is actually digital.

But what really got me to get my modular synth was that I wanted to integrate it with this electronics project I built where I was controlling a YM2612 chip (FM synth chip used in the Sega Genesis) with an Arduino clone (Teensy) and wanted it to interface and trigger other modules. But I fell in love with the synth more than my mad scientist electronics projects.

It’s taken some time to fit in the synth with the rest of Militia Joan Hart. Brandyn is doing sounds all over the place and Andy has been doing the same thing with the guitar.

Would you describe MJH as “improv sound collage”?

SM: So, at first, when I brought on the synth, I was showing off how much bass those things can push, because it’s just a frequency as far as the circuit is concerned. If you say, “hold the speakers as far out as they can go for 5 seconds and immediately hold it as far in as you can for 5 seconds,” it’ll do that and you’ll eventually rip your speaker cone. And, Brandyn is WOLFZiE, so his bass was already awesome. So [the sound has] evolved to use a lot more creepy horror samples from my super-favorite digital module: “Rounds” by Mutable Instruments.

MJH as a improv sound collage? That’s pretty fair, but that’s not exactly true. We do have some actual songs we play, though I don’t know what they’re called. There are always lots of new beats intermixed with these core songs from their cassette released on TVLiFE before I joined the band.

Vaporgoth is what we call ourselves. It’s not an established enough term where we feel restricted by the expectations of a known genre, but still kind of gives you an idea of where we’re coming from. 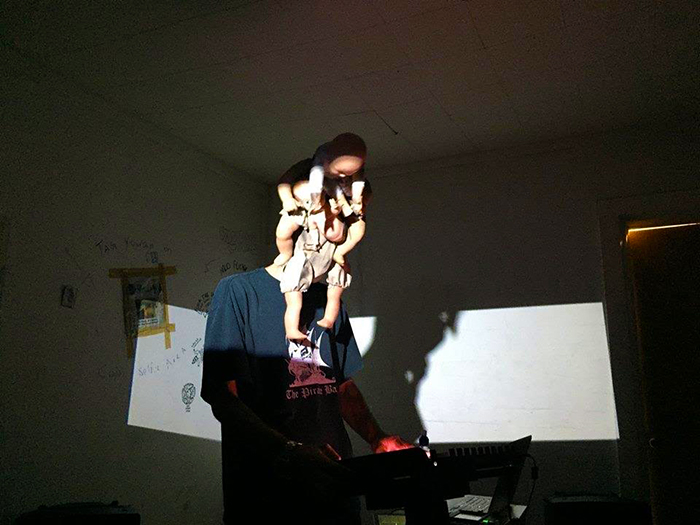 MassaW performing at Night of Neuralgia. Photo by Damian James

So let’s talk about the noise / avant garde music scene here in Phoenix. You recently teamed up with PHX SUX to host “Night of Neuralgia”. How was the event received overall and do you feel that there’s an audience for noise here?

SM: I was very pleased with how the night went. I’ve been trying to follow the Martin Atkins playbook of erring toward overfilling a small venue rather than having that same number of people down at Crescent or something, and I’m glad I do. I didn’t actually do a head count but dozens of people filtered through, which I consider a big success for a show where we only gave out the address via word of mouth. I really wish I could have put Sludge Lords between Kroun and Earwiig because the reaction was how I expected: several people went home. I don’t think that would have happened if I had a breather band in the middle…. weird, but not punishing. With something like noise, or any genre that doesn’t really have a scene, it’s hard to gauge how well it’s going to go in advance, but there are some great artists in Tucson who inspired me to pursue a noise scene here. It’ll all be baby steps, but we’re trying to get a monthly event at the new Trunk Space under the Night of Neuralgia brand and are currently booking the second Night of Neuralgia for November.

In a city where most bands create “accessible” music, do you feel that Phoenix is ready for a noise scene?

SM: Do you think people are intentionally creating accessible music around the scene? Like you’re suggesting they might lean a little more toward that PG-13 rating when they could have gone R? Did the song sound too indie-pop when it would have been better sounding like The Black Keys? I really don’t know for sure. I mean, to some extent, if you’re not making the music for just yourself you’ve gotta at least consider audience.

As far as the noise scene being ready, I think we’re ready for something new no matter what it is. Ultimately, I would like to use this project and other similar projects to create spokes between all the scenes that are in the Phoenix Metro Area and connect with Tucson. None of the scenes know about each other and I think that’s a shame. I’ve been to too many shows where there’s this awesome touring band and it’s like me and Andy Warpigs hanging out watching them along with the opening acts. If we could make some major scenes that are cross-genre, there will be plenty of room for very genre-specific shows, like power electronics noise.

Break out the power saws, eh?

SM: I’ve seen close to that at Firehouse actually. I was blown away with the creative ways they were making noise. 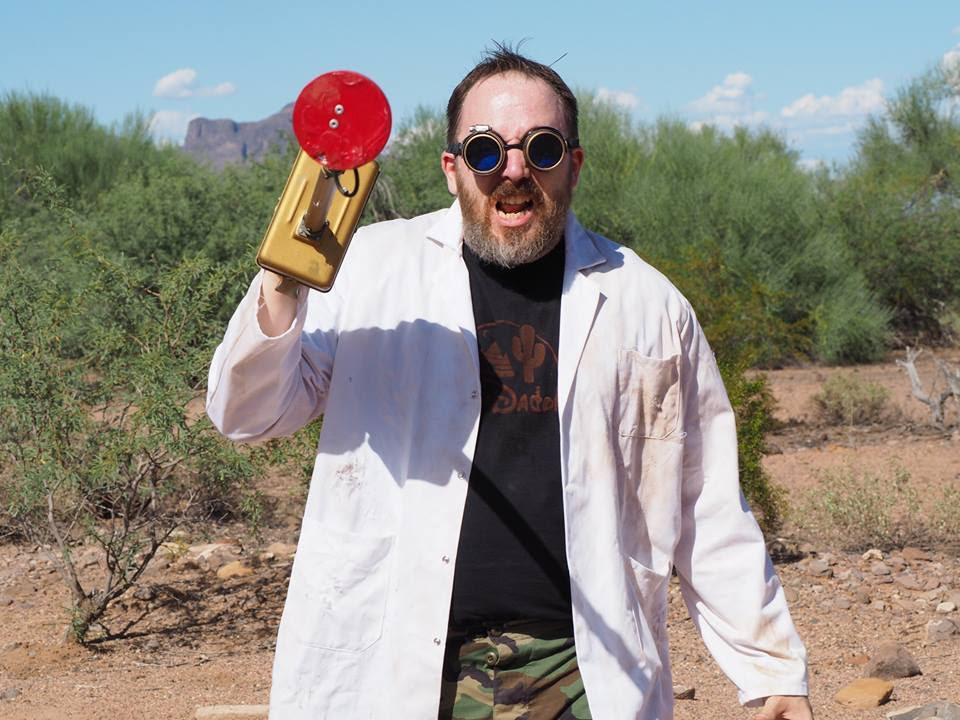 In the wasteland. Photo by Jennifer Mitting

What is it about noise that you think appeals to other artists who create it and the fans who listen to it?

SM: Noise means a lot of different things to everybody, I’ve learned, but the common theme tends to be that it sounds unnatural, it has dissonance, and has at least spikes that cause displeasure at some level. I’m not necessarily a fan of the pure noise sort of acts myself, as in it’s not something I put in at home except for research, but I really enjoy it in a live environment. I still think Igloo Martian is the best example of the sort of intense noise act I really enjoy live. He does just such intensely grating noise while doing really weird performance art, like when he poured all that pancake batter on himself during the Indie 500 and rolled around in the dirt. It was the best 45 second set I had ever seen in any genre (though I’ve never seen any other 45 second sets). Something I really enjoy about it is the experimental nature and the complete inability to set expectations for what will happen next. I would anticipate at-home listeners enjoy the harshness mixed with the wild experimentation.

I typically listen to the more drone/ambient/IDM myself which gets very noisy and creepy, with weird textures and uncanny valley feelings, but it’s more calm and organized. For example, today I bought the entire Phil Western collection which was like 48 albums that included 4 albums from my old favorite band, Download. That’s my jam right there. Download was what came out of the ashes of Skinny Puppy after their breakup, which was a collaboration between Cevin Key, Phil Western, Mark Spybey, and others. My favorite band is probably Boards of Canada, though Spybey and Western’s newer act Beehatch has been right up there lately.

I think you can see why the harsher noise music parallels with a lot of the stuff I’m really really into, like truly fanatical about. I think that if combined with performance art and if we go with a wider spectrum of “noise” music that encompasses my tastes listed above, through to the most intense power noise, we’ll find out there’s a lot of people who have just been sitting around waiting for a weirdo-experimental music scene to popup. I know I was for years.

SM: We’ve got plans. Definitely working on new material, but we tend to focus on what to record at the TVLiFE label. While we wanted to do MJH for Halloween we had some more pressing releases we’re working on.

What piece of advice would you give to a budding noise artist?

SM: I’d love for more people to just find weird ways to make noise through unconventional means. Sample your washing machine. Plug your Casio keyboard into some guitar pedals with a mic that’s getting feedback. Show your friends when you think it’s cool. Once they start grinning, give it a name and start finding a place to play.