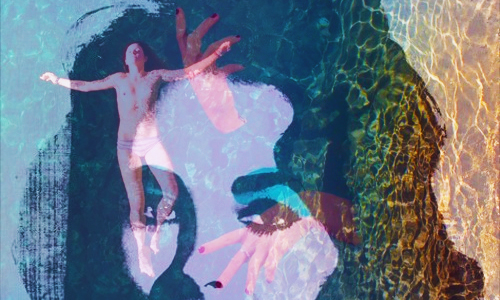 The Wiccan Babysitter/Benjamin Galaxy endeavor is a bit of a mystery I stumbled across in my unending quest for new music and it reaffirmed my commitment to this aforementioned quest. “Rat” is that instance when your angst grows to despondent proportions and you hit that proverbial breaking point. Suddenly, you’re at peace with dire circumstance. You are the calm in the eye of the storm watching the destruction unfurl around you. And, did I mention that this is a project from Ben of AJJ fame? AND this track also features Sean from AJJ on vocals.** Listen to the track below. The new s/t release from Wiccan Babysitter/Benjamin Galaxy comes out this week so you can score your copy here or through Bandcamp.

**Correction: That’s Ben on vocals, not Sean! We’ll be out back beating up an editor for the rest of the day.

Fusing shoegaze-y alt-rock with bedroom pop, Carrie and Matt Wagner create a sound all their own as Silver Liz. The Chicago-based duo released their two-track single in September. The first song, “Float”, gives the listener the same sensation the name suggests. The vocals lift you gently while the sea of sludgy, hypnotic sounds carry you along. There’s sort of an angelic angst as dreamy vocals merge with fuzzy guitars. Listen to “Float” by Silver Liz below and be sure to check out the second single from their debut available through Bandcamp.

The Phoenix alt-indie act has a powerful sound that oscillates between subdued and unleashed on their new single, “Anchor”. Aggressive drums meet stadium-ready vocals on this reminiscent number. This is a track that will translate well to a club setting so all you local readers should head out to the Rebel Lounge in Downtown Phoenix on October 14th to catch Luau performing live. Until then, you can enjoy “Anchor” here…

Sean Gavigan, Zac Ciancaglini and Gabe Wilhelm make up the musical trio known as Raccoon Fighter. Although all three players are originally from Jersey, they all relocated to the Big Apple to pursue professional gigs within the music industry and got to work with artists like Blonde Redhead, Willie Nelson, and Ryan Adams. In 2009, they joined forces to form Raccoon Fighter. Since that time, they kept pretty busy and are now gearing up for their third EP, Hover Craft. “Adderall” is the first single from that effort – something a little grunge-y, a little psych, and a lot of garage rock. Listen below and join us in the wait for Hover Craft.

Stoop Kids describes their sound as an “eclectic mix of soul, hip-hop, surf, jazz, and rock with a psychedelic aftertaste” and I’d say that’s a pretty accurate assessment. On their September single, “Curious Man”, the New Orleans-based act fuses various influences for an entirely new sound that holds glimmers of popular music of yesteryear while fashioning something entirely modern. Add to that the theme of fluid sexual identity and “Curious Man” is a jam for the new generation. Stoop Kids are a band to watch. Start here with “Curious Man”…

This alt-rock band out of Ogden, UT has a sound all their own. To mimic this sound, you should take a handful of NYC pop, toss in sassy falsetto, and mix it up in the garage. “Creature Double Feature” from Mojave Nomads has an angst-y energy that will burrow under your skin and force your limbs to move. Give the single a listen here and, if you dig the track, I suggest checking out Mojave Nomands’ debut, The Black Sheep EP, here.

The 3-piece out of Olympia, Washington known as Le Grotto dropped a new 2-track single through 2060 Records. These alt-rockers have a grunge-y garage sound that I can really get behind. “Don’t Hide” pushes the angst way up while “Sad Story” combines trippy guitars with a touch of sentimentality. This is definitely a band I’d like to hear more from and, thankfully, it looks like they have another track available through their bandcamp page here. But, first, check out the Don’t Hide // Sad Story single from Le Grotto below…

This four-piece act out of Buffalo, NY adds some shoegaze-y elements to their unique brand of indie-alt-rock. “Reminders” is the first official single from the Hundred Plus Club’s forthcoming EP due out at the end of September from the indie label, Admirable Traits Records. Edgy guitars meet vocals that oscillate from disinterested to angst-ridden. Hundred Plus Club is a band to watch. And, if “Reminders” is a good indication of what we can expect from the band’s EP, I expect it to be a worthy listen. Give “Reminders” a spin below and, if you dig what you’re hearing, you can download the full EP here.