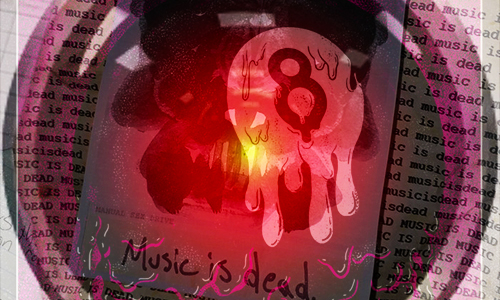 Um, if Fairy Bones could stop voicing all my internals anxieties, that would be great. “8-Ball” does just that but in a rowdy, spiraling, soundstorm that I just can’t seem to get enough of. The band dropped two new singles this month at The Rebel Lounge and now fans who missed the show can get their very own copy of the two tracks through the power of the internet. “8-Ball” and its counterpart, “Pink Plastic Cups”, represent quite a noticeable progression for the band since their Dramabot days toward a more cohesive sound. Hence, it would seem, every new Fairy Bones’ track becomes my favorite Fairy Bones track ever. Listen to “8-Ball” and make sure you don’t miss “Pink Plastic Cups” or you’ll be missing out.

After you listen to “The City (Kill Kill Kill)” from Dan Waszay, you might wonder if the metropolis isn’t Frank Miller’s Sin City. There is a similar aesthetic in both: dark, a little despondent, and maybe a little dangerous. Waszay has a raw energy and noir edge that drives this single. Give “The City (Kill Kill Kill)” a listen below and, if you love this track as I do, consider purchasing your very own copy of Dan Waszay’s s/t EP here.

Jazzy goth punk? Revolutionary noir? You can’t really pigeonhole the Manual Sex Drive sound into a traditional genre and that’s part of what I like about this band. “Business Casual” kicks off the band’s latest LP, Music is Dead, which dropped earlier this October. This single proclaims, “It’s 1984,” setting the demise-is-upon-us theme that continues throughout the album. Manual Sex Drive provides the soundtrack to the post-capitalist rise of anarchy; a somber view of a world on the brink, tinged with a circus-like frivolity. You can preview the complete album through Bandcamp or show your support by purchasing your very own digi-download here.

This New York act combines growl-y vocals and driving guitars for a fierce sound guaranteed to rile up a crowd. I am, however, in question of the basic premise of this song. These cats obviously know how to have fun no matter what the lyrics suggest. This single comes to us from the band’s 4-track EP, I Don’t Know How to Have Fun on an Island Where I’m Always Wasting Time. Yeah, it’s a mouthful, but it also might be the best eleven minutes of your day. Listen to “IDK Fun” below before continuing on to the full EP here.

Maybe I should begin this by saying I’m a huge SciFi nerd so when “HAL 9000” crossed my desk with its post-rock sound and post-human vocals, I was sold. Immediately. Gritty and a little grimy, Beerwine King definitely delivered a fuzzy garage rock sound I love despite the Bro-culture sound of their name. This Oakland act has some serious kick and I want more. Thankfully, this is just one single from their forthcoming album recorded at Nu-Tone Studios. You HAVE TO listen to “HAL 9000” below so you can join me in the wait for the rest of the release from Beerwine King.

This duo out of St. Louis combines the talents of Morgan Nusbaum (guitar/vocals) and Jason Potter (drums), but don’t start thinking the lack of bass or additional instrumentation is going to leave you with a bland, stripped-down sound. Oh no. Bruiser Queen is feisty and fun and won’t leave you wanting. Their new single, “Telepathic Mind”, is high-energy garage rock straight from the Midwest to your earholes. Check it out here…

Now, this track isn’t feisty in the loud, distorted guitars and smashing drums sense. No, it’s feisty in a dirty-funky-grimy kind of way. With repeated phrasing of “Shake me up/shake me down/shake me down/I’ll Be Around” plays, it will begin to dance in your mind long after the track swirls itself into the ether. The Growlers have been around and kicking ass for sometime now so I was excited to see their latest album, City Club, is produced by none other than Julian Casablancas (of The Strokes fame). You can’t have these new Growlers’ tracks sounding too polished and Casablancas doesn’t let that happen. Definitely listen to “I’ll Be Around” below or secure your own copy here.