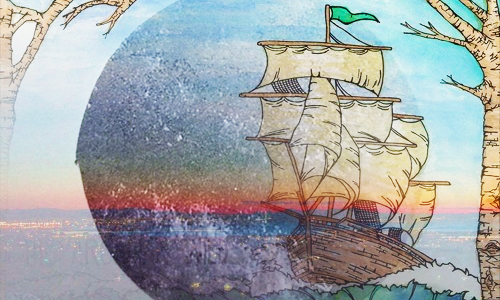 This dreamy number from Nashville-based indie/folk musician/producer Paul Johnson, who performs under the name Canyon City, will enter your ears and soothe your soul with its gentle musicality and thoughtful lyricism. Intricate guitar work gives “Fireworks” a lavish, melodic sound despite the minimal approach. The single comes to us from the band’s debut full-length, Midnight Waves. Sink into the soft-spoken soundscape of “Fireworks” by Canyon City below and, if you love this song like I do, then move into the fullness of Midnight Waves (available here).

The sassy band outta St. Louis known as River Kittens creates a sound they describe alternately as “Raunch Folk” and “Smartass Bluegrass” – amongst other terms. Whatever it is, I’m quite taken with the earthy sounding snark that comes through on “Mama”, a new single from the band. One might say it’s both salty and salt-of-the-Earth. The track comes to us from the River Kittens’ s/t EP which came out earlier this year. Give “Mama” a spin below then head over to Bandcamp for the full EP if you, like me, love what you’re hearing.

Jackie Venson, an Austin-born guitarist and vocalist that infuses indie folk and blues for a sound all her own, recently released a collection of live tracks to follow-up her 2015 full-length studio album. Venson combines nimble coffee-pop vocals with a bluesy, stripped-down guitar on “Back to Earth”. I don’t know what secured my Jackie Venson fandom first: that voice or that guitar. In truth, it’s probably the interaction between the two that makes Venson’s music magic. Listen to “Back to Earth” below and, if you like what you’re hearing, check out Venson’s new release, Live at Strange Brew, here.

The indie-folk trio known as The Arcadian Wild hail from Nashville and you can hear some of the salt-of-the-earth sounds of that city in their new single, “Rain Clouds”. Two vocalists blend vivid harmonies while the strings of both guitar and violins lull the listener. Combining the talents of Lincoln Mick, Isaac Horn, and Sarah Wood, The Arcadian Wild is a band to keep an ear on. Listen to “Rain Clouds” here…

Originally from Hawaii, Cecil John now makes music out of L.A. and you can hear those Pacific breezes in his new single, “Let Go”. The single has a chill, stripped-down sound that carries with it a tinge of the ebbing summer. Cecil John is sort of a musical jack-of-all-trades who produces, writes, records, mixes, and masters all of his own music. “Let Go” demonstrates the artist’s tendency toward fusing varying styles and influences from hiphop and folk to R&B and indie rock. Give the single a spin below…

“Come With Your Friends”

Eric & Happie, the Austin-based duo, craft glowing harmonies set to an equally vibrant melody on the title track from their debut release, It’s Yours. “It’s Yours” combines earthy folk with effervescent indie for a song that will warm the cockles of your heart.  The two vocalists of Eric & Happie create a lyrical dialogue that continues beyond this track into the rest of the release; each song a duet that fuses the sweet with the somber. Check out “It’s Yours” below then delve into the complete release by the same title (available here).