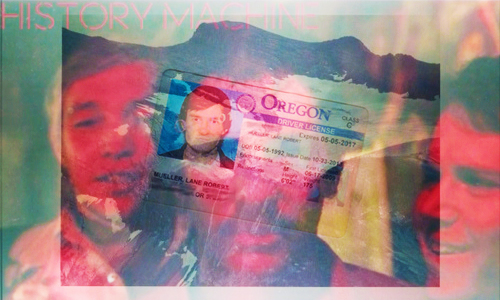 “Dime” gets things started with a fake out, a jangling take on an old-school rock-n-roll ballad with a gentle melody, the sweetness undercut by the dark minor chords of a chorus that asks “When did we forget how to talk?” The record is filled with moments like this, lovely, vintage-sounding tunes and loaded melancholic laments, all delivered in singer Chris Melton’s rich baritone.

The band does a great job of peppering in unexpected moments, ranging from mandolin solos and a shout-along chorus to screeching guitars and synth wobbles, while never losing the music’s warm, lived-in feel.

“Wind” is an early standout, a seemingly simple country diddy made sinister by Melton’s delivery and the eerie sounds swirling in the background. “All Cool on the Western Front” is another great track, a breezy tune that changes course midway through the guitar solo, when the bass switches to fuzz and the tune swings into a psychedelic sludge.

With their self-titled release, History Machine delivers a confident, pleasingly experimental album that rewards repeated listens, which is easy to do when the songs are this good.

I have to admit, the name Great American Canyon Band had me expecting something a little different; perhaps of the stomp-and-holler variety that’s been so popular lately. And while there are elements of that open-hearted Americana on display in Only You Remain, this Baltimore wife-husband duo make that sound their own by pairing their acoustic elements and rich harmonies with swirling synths and echo-heavy guitars.

The result is an intriguing mix of hazy dream pop and Laurel Canyon-indebted psychedelia, the music capturing the widescreen magic of driving on a vast open road. So really the name is a perfect fit, and Great American Canyon Band should definitely find a spot on your next roadtrip mix.

Hazy, dreamy vocals? Scrappy, chaotic guitar solos? It’s like this record was built to appeal to me, which might be why I can’t stop listening to it. Portland’s Candy Cigarettes is really a one-man band in the form of Lane Mueller, a multi-instrumentalist who produces all the music. The 24-year-old Oregonian, whose driver’s licence graces the album cover, kicks things off with “Selling Price,” a spacey odyssey filled with trippy background singers and woozy guitar solos. The record certainly has some eclectic edges, such as “My 45,” which drops the dark psychedelia for a breezy early-Flaming Lips vibe, or “Molded Ocean,” which takes a clear page from the whispered sorrow of Elliott Smith. But no matter the style he reaches for, Mueller keeps things pleasingly off-kilter, making Candy Cigarettes a record you need to check out.