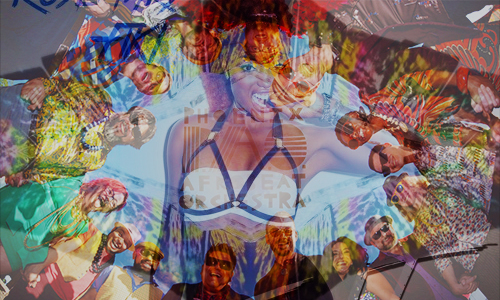 Ah, the blanket definition of the term “world music.”

I must start this article with some block text copy from Wikipedia that I find fascinating and hilarious so, if you’re not into that, go ahead and skip right down to the bands.

Still with me? Cool.

I’m sure your familiar with the term being “popularized in the 1980s as a marketing category for non-Western traditional music .” But I betcha’ didn’t know that “the term has been credited to ethnomusicologist Robert E. Brown, who coined it in the early 1960s at Wesleyan University in Connecticut, where he developed undergraduate through the doctoral programs in the discipline”? I didn’t anyway.

It reads on, “There are several conflicting definitions for world music. One is that it consists of ‘all the music in the world’, though such a broad definition renders the term virtually meaningless.”

Worldbeat more specifically “blends Western pop music or rock music with world music or folk music influences. It may include cutting edge pop music styles as well. Succinctly, it can be described as ‘local music from out there’ or ‘someone else’s local music’.” I like those.

I’ve covered world music before, but that was with an Arizona focus. Now that we’ve gone (inter?)national, I decided to extend the focus of this article on artists from around the country and globe.

OK, I admit it, this was my first experience with a 360⁰ video on YouTube. Sure, the technology’s been available for a little over a year now but what can I say other than that I’m thoroughly happy that my “first time” was with Phoenix Afrobeat Orchestra and their beautiful tune, “Oppression Scatter.” One of the original songs the group has penned together, “Oppression Scatter” is a crowd favorite that keeps the body moving all while delivering a conscious message: “Can you see them suffer? Can you see?” And, you gotta love that bari sax. Make sure to check out the video below and go see them live for FREE when the play the Crescent Ballroom 5 Year Anniversary Party on Monday October 3rd!

Chanelle Gray is an up-and-coming singer/songwriter from South London currently residing in New York while Rayvon is the Barbadian-born-Brooklyn-raised dancehall singer known for his work with Shaggy (“Angel” anyone?), as well as his own solo career. The two have teamed up to deliver us this modern reggae classic, “Nuff Tings”. Chanelle’s vocals are both silky and sultry, completely drawing you in with their melody. Rayvon offers the perfect counter-balance with lyrics delivered like wildfire: burning quick and hot one minute, smoldering the next. Make sure to rock “Nuff Tings” below.

Damn RoseMary Fiki, where’d you come from?? This Nigerian-American singer-songwriter based out of Philadelphia has changed up her style and sound with the release of her latest single, “I Got It.” Though this song sounds more inline with someone like Azealia Banks, I actually enjoy RoseMary Fiki’s previous work as well (think more Bruce Springsteen and Erykah Badu… I know, dude), but “I Got It” is something else entirely. Clearly more pop, while at the same time embracing many Africana influences, especially in the vocal chants. “I Got It” has quickly become a favorite of mine. I certainly look forward to where RoseMary goes from here. Bump “I Got It” below.

You know how when something gets labeled and marketed as “cool” it doesn’t always get the projected outcome its creat0rs had in mind? I feel if anyone can live up to the moniker “The New School Ruler of Cool”, it’s Dreggae, the Jamaican bred, Atlanta- based dancehall/reggae songwriter. Being a descendant of the great dub master King Tubby certainly doesn’t hurt either. Although “Rum Days, Vodka Nights” appears to be a few years old, it’s the first track off Dreggae’s new Roots. Rock. Dreggae. album which for now is only available through his website (hey, collecting one’s singles and re-branding the material as an album never hurt anybody). The song is bouncy and playful, Dreggae’s smooth vocal delivery perfectly complimentary to the music. Although it contains many elements of classic reggae, it’s clearly something newly inspired by hip hop and pop, and definitely feel good. Listen to “Rum Days, Vodka Nights” below.

“Even if someone (or something) breaks your heart, that is beautiful and incredibly valuable. You will forever carry a part of them with you. And you are more alive for letting yourself having gotten hurt like that.” So states the Congratulatinos with their new single “Caroline”, the first track off their new album Don’t Fade. Based out of Cambridge, Massachusetts, you could almost never guess that hearing their spellbinding track and it’s worldly influences. Dropping out of a PhD program, splitting up with your girlfriend, and breaking up with your band led principle member Diego Ardila to startling revelations: “I learned to Salsa dance. I recorded on my own. I cried at night for no reason or sometimes because I missed her so badly but I found solace in West African rhythm and the heartbreak of Bachata music.” You can definitely hear all these influences in “Caroline”. And I’m certainly glad he teamed up again with member Marco DeLiso because, now that they’re the Congratulatinos, we’re all the better for it. Check out “Caroline” below.