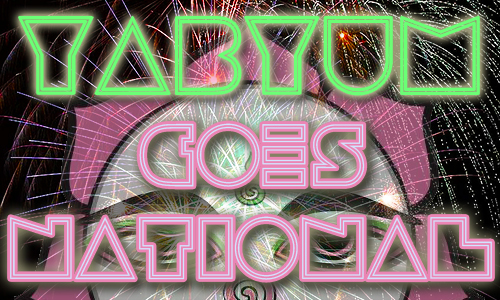 You might have noticed some big changes around here. First, there’s the website design that we originally planned to launch on August 1st, but we finished early and someone (ahem, it was me) couldn’t wait to show off our new digs.

As we drew closer to YabYum’s Seven Year Anniversary, we began contemplating the future of the publication.  When I originally started the website, I thought of YabYum as my community service project. I had worked for a handful of publications by that point and felt the Valley could use additional arts coverage that focused on the musicians and artists that called Arizona home.

Several years later, we decided to expand our coverage to include musicians from the Southwest/West Coast regions to increase connectivity between Arizona artists and those living elsewhere in the region. We started receiving a lot, and I mean a lot, of submissions from other areas as well. We dismissed each one with a polite form letter, but then we started to wonder why exactly we were doing it.

Increasing our coverage area (and readership) only increases visibility for the artists we cover. Wasn’t that the entire point in the first place? It started to seem like a smart move, not only for us, but for the artists we feature as well.

And, as the years ticked on, there seemed to be something a little self-congratulatory developing in local arts coverage. Sorta like “everyone gets a ribbon” and, by ribbon, I mean a positive sentiment expressed in print until coverage was no longer a boon of a job well done, but an expectation for hitting record.

As many bands will tell you, we haven’t covered everyone in the local scene. It’s just not possible. We have, however, maintained a high rate of coverage with regard to our local submissions’ pile. Over the past couple of years, as our submissions have increased, this percentage has decreased and will likely continue to do so. But, fear not, we remain Arizona-based and Arizona-focused.

We hope that in expanding our coverage we can expand the visibility of Arizona music and arts. This shift will also give us an opportunity to increase our coverage of underrepresented artists who don’t fit into genres most popular within the local scene and, therefore, don’t always receive the timely coverage they deserve.

And, who knows, maybe you’ll find a rad band from Boise that fits with your style you can reach out to before your next tour? Or maybe you’ll find an electronica artist out of Miami you want to collaborate with? Or an indie band from Denton? The possibilities are endless.

Don’t let the big-fish-in-a-moderately-sized-pond thing fool you. If you want your band to succeed, you need to be bigger than one place. This shift at YabYum probably won’t be the thing to launch you there, but we’re hoping it might help. There’s something special happening in the arts here. Let’s all work toward letting everybody else in on the secret.

Implied but not stated: Make sure you keep sending us the things you make!! Our submissions pile is oppressively large so we don’t have time to chase after you folks who are too-cool-for-PR. But, don’t worry, we’re still going to listen to the things you send us.