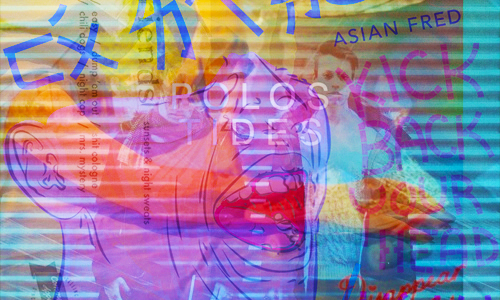 “Kick Back Your Head”

Now, this is a release I’ve been waiting for. When Fred Huang of Of the Painted Choir informed fans he was tossing in the towel and heading back to Tucson, I was heartbroken. Thankfully, it didn’t take Fred long to undertake a new musical effort and Asian Fred was born. The songwriting is impressive, the playing impeccable, and the sound is refreshingly different from what fills our submissions box day in and day out. This two track single is the first official release from Asian Fred. “Kick Back Your Head” and “Ugly” both have that new modernized version of retro-rocknroll that has defined the band’s sound; a sound both uplifting and subtly complex.  Listen to “Kick Back Your Head” here and stick around for “Ugly”. Both songs were totally worth the wait.

I don’t know why I always associate electro-pop, but I do. There you have it. Maybe it’s the warm, late nights. Maybe it’s a deeply ingrained need for uplifting beats to combat the despair the Arizona summer usually brings. Whatever the case may be, The Swoons have a summertime track perfect for late night desert drives. The new track combines the work of London/Toronto-based duo, The Swoons, with L.A.-based producer, DeafKulture. Give the song a listen here.

Let’s hear it for Tucson. Those cats are making some stellar summer tunes like this new single from Dirt Friends. “Dry Spell” is the first song released from the band’s latest album, Sunsets & Night Sweats. The album, which was released on Commercial Appeal Records, promises to be a record worth hearing if this track is any indication of what’s to come. Dreamy garage pop drifts toward the listener like a warm breeze rather than the bludgeoning melanoma-causing winds we associate with summertime here in Phoenix. Listen for yourself and don’t forget to snag your copy. Sunsets & Night Sweats is also available on cassette through Baby Tooth Records.*

In the wild and crazy days of youth, I would protest the hostile heat of Arizona by dancing all night in a sweaty club; inviting hallucinations while simultaneously daring my body to survive the Sonoran summer. “Disappear Here” is definitely a song I can see getting down to with some friends on one of those too-hot-to-live nights. The L.A. act released this new single in prelude to their forthcoming album due out this September. If you like that club-pop feel, check out “Disappear Here” and get your pre-order in (here).

This way-under-the-radar Tempe band should really consider some social media outreach because their first single has me hooked. “Tides” is a disaffected summer song that reminds me of listless heats and the never-ending daylight. And yet, the song is about love. “Tides” has a surf-infused indie vibe while the vocals solidify that lo-fi garage credibility. Check out “Tides” from POLOS here…