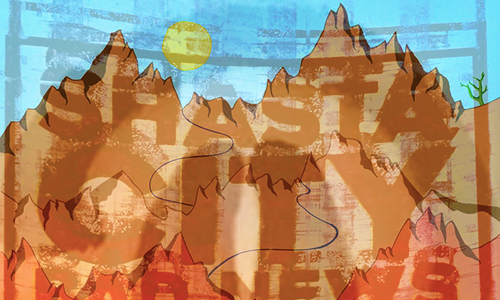 For their latest ep, Tempe’s Huckleberry lives up to their moniker with a gorgeous record that’s sweet, a little bitter and evocative of long country road trips. The six-piece kicks off their four-song album with “Shasta,” a warm, breezy tune filled with tight harmonies and beautiful slide guitar. With lines like “Ain’t got no plans/Just a car and keys,” “Shasta” recalls both the romantic wanderlust of the Grateful Dead and the pensiveness of Ryan Adams in full “Cold Roses”-mode. “City of Angels” is a rowdier take on their sound, with brassy piano lines and the kind of chorus that is custom-made for drunken singalongs. “Bad News” is a lightweight strummer with the kind of melody that digs its hooks in right away and never let’s go, while closing track “Wild Ricky” is hypnotically hazy and lightly psychedelic, with more twists and turns that its short running time would suggest. With beautifully warm production by Jalipaz at AudioConfusion, Shasta City, Bad News Ricky sounds like the kind of record that would have been all over the 70s AM dial, and the perfect playlist for this year’s summer road trip.

It is tempting to call Tucson singer-songwriter Gabe Lehrer’s Cuban Chevy a bedroom recording (and there certainly are plenty of quiet, intimate moments and heartbreaking lyrics), but it’s so much more than that. The record has an experimental and adventurous streak, with dark, ambient collages of rumbling synths and atmospheric sounds weaved throughout the record, creating a fluid, flowing album that lets Lehrer’s beautifully delicate acoustic numbers shine though. And the songs are great, from the sweet melancholy of “Let It Fly” to the mournful banjo plucks of “Just a Kid,” which should earn Lehrer comparisons to Bright Eyes and Sufjan Stevens. And like those artists, the young songwriter is confident and daring in his choices, filling each track with its own eccentricities and taking a big chance that almost always pays off (for more on this, see the wonderfully loose 18-minutes of “Clattering Chaos Conducted Concurrently (For 12 Strings)”). The lyrics can feel a bit twee at times, and the smooth funk of “Quiet In The Library (!)” is a jarring change from the rest of the folky tunes, but Cuban Chevy is a truly impressive record, and a great entry from an artist I’m sure we’ll be hearing more about.

“You made me in a whorehouse down on main street.” Now that’s the right way to start a country record. And that’s how Tucson’s The Peccaries kick off this EP, with the rest of the record living up to the rough country blueprint laid out by that opening statement. Anchored by Manny Rosen’s powerful, soulful croon, the EP has a loosely hewn feel, at times feeling like the whole thing might fall apart. But this shambling feeling matches the songs, which tell of tough people living in tough times. The way the drums and the electric guitars come and go in “Two Thirds Truth” give the song a powerful chaotic feeling. “Mile off from Zion” takes this feeling a little too far, with the band sliding around the tempo at a distracting rate, but soulful “Moving On” gets the train back on track. A fun debut and worth checking out.