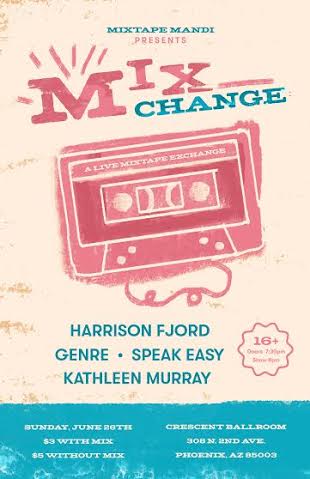 What makes a great mixtape? Is it all about the song selection? Or do you have to have a theme in mind before you begin assembling the playlist? These are the important life questions that you should set your mind to readily start addressing in the coming week. Mixtape Mandi is bringing back MIX CHANGE: A Live Mixtape Exchange, at Crescent Ballroom on June 26th. And I expect to see all of you there with a carefully curated mixtape in hand.

I bet you’re wondering how this whole mixtape exchange happens so I’m going to break it down for you. First, assemble your mixtape and secure a ticket to the MIX CHANGE. Show up with your tape in hand (only $3 with mixtape) and enjoy some live music. Snag a stranger’s mixtape on your way out the door.

And, if you don’t have the time to invest in compiling a worthy mixtape to bring along, you can pay an extra couple of bucks and still walk away with a mixtape at the end of the night.

I had a chance to ask Mixtape Mandi Kimes a few questions about the upcoming event and what goes into making a stellar mix.

Mandi Kimes: There’s no wrong way to make a mix; it all just depends on personal preference. For me, I like when each song flows in and out of each transition seamlessly, or when the theme of the mix is subtly hidden in the lyrics. Sometimes I like asking a person, “What are your top 20 favorite artists? What’s your favorite song by each artist? Put it on a mix,” and it gives me a better understanding of what that person’s taste is, whether in music, or in life just judging by lyrical content.

This is being billed as “the return of the live mixtape exchange” – when was the first mixtape event?

MK: The first one took place about two years ago and, to be honest, I had NO clue what I was doing! I had hosted mixtape exchange parties at my house, where people would bring in mixes and we’d listen to records and play games and such. Then someone brought up the idea of making it a show, so I put a lineup together of 3 acoustic acts and hosted the event for a lot of close friends. For my second one, I wanted to make it bigger and more worthwhile, so I’m booking 4 eclectic acts of different genres to give it a “mixtape” feel, as well as extending the show to 16+.

So… how does this mixtape thing work? Should mixtapes be brought in on CD or an actual cassette tape? Will participants directly exchange mixes or will they collected and randomly redistributed?

MK: Mixes can be brought in any form, whether its CD or tape. When people come to the venue to purchase their ticket, they’ll place their mix in a bin. Then, at the end of the night, as people are exiting the venue, they’ll reach into the bin and pick out a mix for the drive home. It’s always great to incorporate interesting album art or display cases to stand out. The goal is that you walk out with something that contains your next favorite song or a new favorite artist you’ve heard of but never got around to listening to.

And who we might expect to find on your own mixtape?

MK: I’m actually making a LOT of mixes because I want everyone to walk out with a mix. That includes the people who show up empty-handed, but still came to the show. Sneak peek mixes can be found on my Spotify account, but I’ll also be making some themed mixes. A few of my favorites include my last monthly playlist, titled “Vibes,” and one that contains a lot of sad, folk music with existential lyrics to make you think. There’s so many I plan on making and can’t wait to find out who ends up with what.

Make sure you head out to MIX CHANGE: A Live Mixtape Exchange, at the Crescent Ballroom on June 26th. More information on that event (and tickets) can be found here! You can also check out Mixtape Mandi on Twitter.