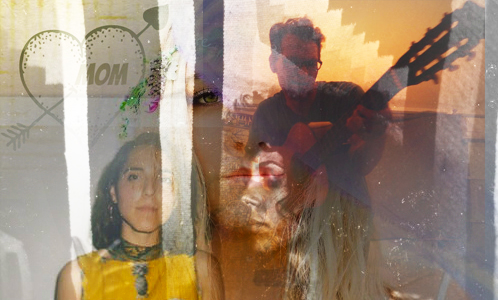 Ever have one of those days where every song sounds the same? That was my day and then I heard “Lullaby” from Tucson’s Karima Walker. The song had a way of soothing my weary soul (and ears). Mellow and meditative, “Lullaby” is just that, a lullaby. Not the kind you sing your child to sleep with, but maybe. Walker creates soundscapes as painters create landscapes. Her songs belong in a gallery. Drift away with “Lulllaby” then stick around to listen to more offerings from Karima Walker.

You might be thinking, didn’t Michelle Blades move to Paris? Yes, she did, but she often visits and on one such trip she recorded this breathtaking number with Phoenix’s own Eamon Ford this past May. “Te Recuerdo Amanda” is a cover of a Victor Jara song and Michelle Blades brings her own experimental undertones to this rendition. This track is a must-hear single. Listen to it. Listen to it now. And, if you missed her last performance at The Trunk Space, you missed out. Let’s hope this globe trotter has plans on another pass through Phoenix sometime soon.

If Saydi’s been around since 2010, how come I’m only discovering her now? How did this not get to us through the appropriate channels? Considering this is her first single, I will allow it to pass, but we should have been told. Tempe’s Saydi creates a dreamy dancepop that is totally enamoring on “Lavender Ghost”. If this single is any indication of what’s to come, I would keep an eye (or ear) on Saydi.

For those of you who aren’t yet familiar with Scattered Melodies (for shame), the “band” is actually the musical pairing of Josh Montag (percussion) and Jake Johnston (bass) and a variable cast of musical guests from the local music scene. For their latest single, “Legacy”, Scattered Melodies joined forces with Laura Hamlin (vocals) and Jack Howell (piano/guitar/strings). Josh Montag wrote this song for his mother and debuted it at his wedding for the mother-son dance. If that doesn’t bring a tear to your eye, you are cold, downright cold. The song is a divergence from the band’s usual hippie groove to something a little more sentimental. Give it a listen.

The coffee-pop act known as gillwire is the brainchild of Jonathan Gil Thwaits. The Chandler band is preparing for the impending release of their debut album by sharing a few rough cuts including the single, “Tragedy Sells”. Combining Ben Folds-esque vocal stylings with an airy alt-pop. Don’t let the name of the track fool you, “Tragedy Sells” is an upbeat number with a bit of lyrical bite. Keep in mind, these tracks are unmastered, but they offer a little sampling of what’s to come. For the finished product, you’ll have to head to Sozo Coffee in Chandler on July 8th (or wait for the digital release).