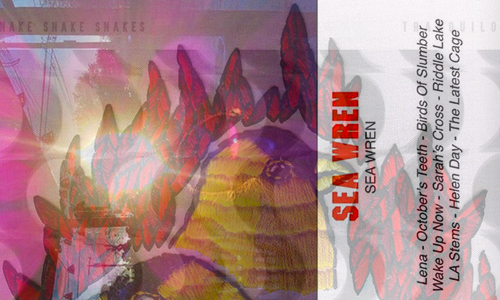 Local sweethearts of the music scene, RØÅR, recently released a new LP at the end of April. Impossible Animals reconfirms Roar’s status as one of the bands you should be keeping an eye (or ear) on. “Dream” opens the album. A befitting position for an album that approaches the listener like an acid-inspired, Beatles-esque hallucination. Psychedelic pop meets modern musical sensibilities for a fantastical aural journey. Impossible Animals was four years in the making and you can hear that in the thoughtful song construction. RØÅR invited some notable local musicians to take part in the recording process including Lonna Kelley (Giant Sand, Cherie Cherie), Ben Gallaty (AJJ), Evan Bisbee (Good Friends Great Enemies), Robin Vining (Sweetbleeders) and others. Don’t miss out on the whimsical experience that is Impossible Animals.

Tres Snakes has moved beyond the buoyant indierock that defined their early releases toward a grittier, garage rock sound and I, for one, can definitely get behind this transition to a more mature, and more thoughtful, approach to songwriting. Serious guitar work meets powerful vocals on every track for a new rock classic from the Snake! Snake! Snakes! camp. Tranquilo opens with “Mantra”, a personal favorite. This track is as close as you’ll get to Snake! Snake! Snakes! of days past. Bob Hoag of Flying Blanket Recording Studio does a superb job (no surprise) of drawing out the vocals from the surrounding instrumentation. Highlights from Tranquilo also include “O Death” and “Wild Nights” (the bonus track). Many of the songs are available for preview through Bandcamp, but to hear the whole album you’re going to need to make that purchase (or head to Spotify). All you local music lovers are definitely going to want to include this one in your collection.

Tucson’s Sea Wren might be making the debut with this cassette, but they’ve already hashed out a solid sound. Sea Wren definitely has a retro-pop feel mingled with some post-punk layers for texturing and that contemporary edge. The tracks were all written by Cherish Rendon and feature Matt Rendon of The Resonars. “Lena” opens the album with feisty vocals and vintage harmonies over the brash garage rock. The upbeat energy doesn’t diminish from start to finish and Cherish has a dreamy voice well-paired with the rowdy musicality of Sea Wren. “Riddle Lake” with its variable and upbeat tempos is a favorite along with “Wake Up Now”. Sea Wren is available on cassette through Lollipop Records and Bandcamp (see below). Pay special attention to the drum work on the recording. It’s out of this world.