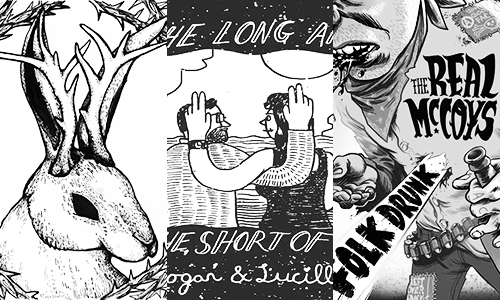 Asa Martin out of ABQ recently released Idiots & Lunatics; an album that will have you questioning exactly which side of that line Martin falls on. This is a great album for repeated plays in the car on your commute. The songs will have you singing, head bobbing, and laughing at the quick wit that shapes Asa Martin’s songwriting. What’s more, this album won’t put you to sleep as other branches of folk have been known to do. “Current Address” is a little more mellow than the surrounding tracks, but rather than seeming out-of-place, it offers a thoughtful reprieve from the feistier numbers. Favorite numbers include the title track, “Wreck Me”, and “Novocaine” which, by the way, includes my favorite lines on the entire album: “She was a shiver of knowledge, on a river of pain. I hope I never see her again.” There’s that wry humor I love. Definitely check out Idiots & Lunatics by Asa Martin below.

The Long and the Short Of It

Lucille Petty and Logan Greene are the musical collaborators behind Tucson’s nu folk duo, Logan & Lucille. The Long and the Short of It leans a little more to the folk-pop side than other punk-influenced albums that appear on this list. The EP starts out on a bit of a rough note for me. I can imagine “Sodapop and Chips” is a great way to kick off a live performance, but “we’d like to get to know your local sodapop and chips,” is a little hipster for me. Hold out, however. Logan & Lucille crafted an EP that is both playful and sweet, but not completely devoid of the grit needed to call it folk punk. “Cold Hands” proves my favorite from The Long and the Short of It, but all five tracks on the EP are worth the listen. Logan & Lucille are currently out on tour, but we can expect them on home turf by the end of the month.

The Real McCoys out of Houston combine folk-punk with Celtic influences for a rowdy bar or any revolution-ready extravaganza. Their recent release, Folk Drunk, opens with the anthemic “Folk Drunk Freegans” and the name pretty much says it all. The Real McCoys tend to focus more on partying than politics, covering the joys of self-abuse from glue-sniffing to drinking, lots of drinking. The Real McCoys achieve a quintessential folk-punk sound from banjos and gang vocals to the energy and spirit of the songs. I enjoy the more introspective numbers like “I’m Gone” and “Sunday Mourn” but The Real McCoys remain solid from beginning to end. Folk Drunk is a superb summer album so I suggest spinning it poolside or in the car on a road trip. Your spirits will be lifted and you’ll soon be singing along. The band has a tour coming up in July with one more date yet to be determined. Let’s hope they make room for a Phoenix stop along the way so we can check the band out live.