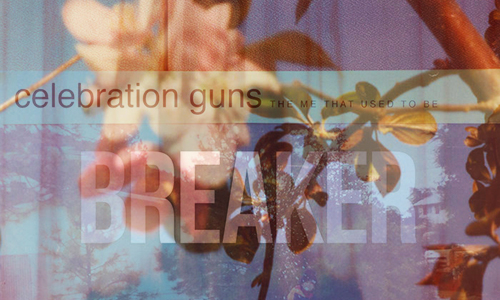 the me that used to be

Celebration Guns, the Phoenix ambient indie pop act, released their much anticipated sophmore effort, the me that used to be, last month on limited edition black virgin vinyl. “The Volunteer” opens the EP with an expansive energy that will have you dancing around the confines of your listening space. The EP turns up the angst for “Have It Your Way” and “Ready to Go” while the pensive title track closes the EP. My favorite track is a toss up between “The Volunteer” and “Thank You for Your Time”, but the me that used to be is solid from start to finish. My one complaint about the me that used to be is the lack of variance between tracks. The songs begin to blur together on repeated listens rather than standing out individually. But the EP certainly has cohesion, I’ll give it that. Despite this one issue, Celebration Guns crafted a thoughtful and dreamy experience in the new EP that I encourage you to sink your teeth in. Get your copy on vinyl while there are still copies to be had (LIMITED EDITION)!! I also suggest checking out the album below right now.

Pageantry out of Denton, TX us brings us another indie dream pop offering with their latest release, Influence. Get ready to sink into the soothing sounds that will fill your ear holes as “Girl Breath” opens the album. This whimsical tone will carry through the remainder of the album in both its somber and its cheerful moments. “Teenage Crime Wave”, the second track, is an early favorite of mine, but each song on Influence has its own charm from the slinking “Giving Up” to the uplifting “Taste for Kindness”. There is a delicate layering of sounds on Influence that other bands would be smart to take note of. Pageantry isn’t too heavy-handed with the effects yet the album is entrenched in subtly rich textures. I definitely recommend checking out Influence by Pageantry. And, if you’re like me, you’re probably going to want to procure your own limited edition gold cassette copy of the album for your collection.

Oakland’s Phosphene definitely creates my kind of dream pop, the brooding kind. Breaker offers up six lulling tracks, stripped down without any elaborate orchestrations. Once again, I have to address the tendency amongst shoegaze artists to allow for a bit too much placidity which can give a homogenized sound to their albums. I think Phosphene skirts close to this line, but pulls through in the end by including tracks like “Rogue” and “Ride” which demonstrate the band’s ability to flex its willingness to explore the range of sounds that fall into the shoegaze arena. Intentionally understated vocals and subtle yet powerful guitar work make Breaker an EP worth hearing. If you dig what you hear, I suggest getting a copy  before they run out. Phosphene’s debut s/t sold-out so new fans are out of luck on the back catalog. Don’t let the same thing happen with Breaker.