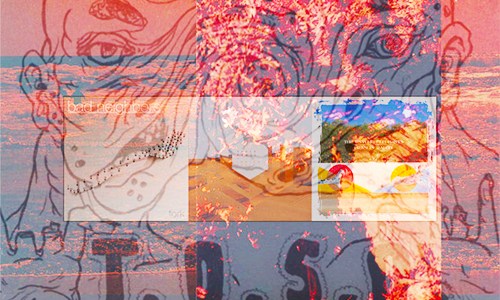 Sonoran Chorus might have only popped on the local scene less than a year ago, but they’ve already released a two-track single and a six-track EP. Now, they have the three-track Laird to add to their ever expanding discography. We were first introduced to the songwriting prowess of singer/bassist Damon Dominguez from his Leonardo DiCapricorn days. I’m glad to see he’s still flexing his lyrical muscles in this new project. “Cartons of Bottles” opens up Laird with a driving guitars and angsty vocals. “Terracotta Forest”, the second track, has a more murky tone than the usual high-energy assault that we’ve started to expect from Sonoran Chorus, but I dig it. The last song, “Shitkicker”, has that branded SC weird punk vitality certain to shake walls and shake up crowds.

A few local acts pulled together to release the PHX Singles Compliation to mark their recent Arizona mini-tour. The trio of tracks features music from The Psychedelephants, Paper Foxes, and Bad Neighbors. The comp kicks off with “Francis Rabbit”, a melodic journey brought to you by The Psychedelephants, an act known for their trippy music. The energy gets cranked up with Paper Foxes’ “Indica Feels”. I am loving the Brian Molko-esque vocals on “Indica Feels” and am currently making time to delve further into the musical offerings of Paper Foxes. Bad Neighbors closes out the comp with “Fork” and their own brand of punk-tinged alt-rock. Hopefully this little gem of a three-track release promises new music on the horizon for all three acts.

Tempe’s T.O.S.O. describes their sound as “progressive desert grunge” and I think that’s pretty on-point. Zac White, Marc Ellis, Eric Ellis, Evan Dorney and other occasionally featured artists recently put out a three-track demo that is packed full of rowdy good times… well, as much as you can cram into ten minutes. Opening with “Prestidigitation Nation”, T.O.S.O. introduces the listener to both the band’s garage rock stylings and their propensity clever word play. “Vortexistentialism” kicks up the energy and throws in some punky vocals for a feisty, shout-it-out number. “Before I Die” closes the album, echoing the humor that moves through D.E.M.O.2. It might be the shortest track on the release, but this little ditty wormed its way into my head for days. Be warned.